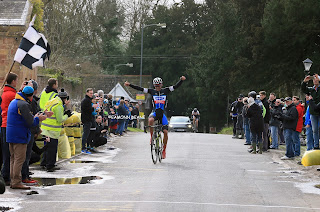 Ed Clemens (Spirit Tifosi RT) won the the Severn Bridge road race, pulling clear from teammate Charlie Passfield, Matt Langworthy (Mid Devon RC), & George Smith (VC Equipe-Flix) before the final climb of King Weston hill, to win alone. Riding his first race of the UK season the 23 year old had spent half the winter racing in Australia and showed he was in good shape. These four had been part of a seven man group that had pulled clear the first time up the steep gradient, consolidating their lead across the flat, exposed industrial Avonmouth roads. 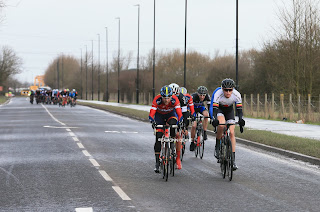 Thomas Scott-Collins (Spirit Tifosi RT), Oscar Hutchings and Lee Frost (VC Equipe Flix), had also made the move and the gap to the peloton was holding at 40 secs after 25 of 68 miles. A full field of 80 faced rain, hail and sunshine but most agreed the strong south westerly wind scudding in off the Severn Estuary had the most influence on the race, only the bigger riders citing the climb. The wind deterred any concerted chase but also started to take its toll on the break away as Scott-Collins, Hutchings and finally Frost lost contact. 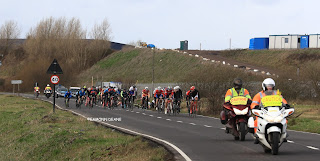 The catch was always likely given the race distance but a crash in the bunch that sent Will Bjerfelt and Elliot Porter (Neon-Velo CT), among others, tumbling onto the verge took the impetus out of the pursuit. 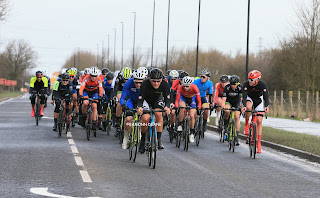 Clemens & Passfield opened a small gap the sixth time up the hill with two to go but the impressive Langworthy, a winner last week at the Primavera race closed the gap over the top and at the bell it was the Devonian making the pace. 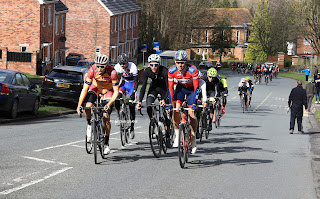 Behind, the race was splitting with late entry Rob Partridge (Bike Channel Canyon) Doug Coleman (Spirit Tifosi RT), Harry Veale (Cycleworks) and Team Wiggins pair Etienne Georgi & Ashley Dennis doing the damage. Clemens made his move on a slight rise before the main climb, Langworthy followed but could not make contact, Passfield did not have to and Smith was already settling for fourth place. 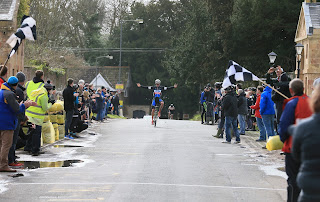 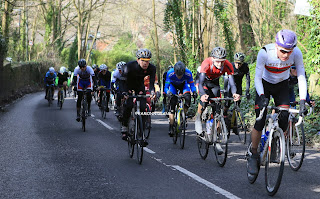 Ed Clemans "... Very windy from the start, the first time over the top we just pressed on and got a gap, the lads worked well. A few bridged across, there wasno let up in the wind, you had to be on it all day. I felt good, kept eating, kept drinking, the climb was hard, definately but coming across the top was hard also, without the wind i dont think the gaps would have opened so much. Going off the momentum of the lads 1-2-3-4-5 last week (Doltcini Classic, Oliver Barbieri led a clean sweep) we know we are strong" 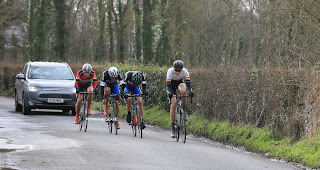 Matt Langworthy
"Really happy with that, a win last week, i came here, its a higher standard. I got in the early break across the top, the headwind was hard we were creeping along. Ed attacked, i followed but the other two couldn't i got across but i did not have anything left, i just crawled to the line. I am getting more hours training in, 12 to 15 a week but i have to balance it with Uni, i am studying Geology"

"For me the wind was hard, the way i am built, it was hard. Very pleased, i came here just to help Ed win and he won, that was the plan, Ed was our leader. Once we got three in the break it was hard to tell if we could stay away, we were flat out, i was pushing it on the climb for the points. When Ed went i could not get on Matts wheel but i knew we had a big gap and i knew i could beat George on the climb. I came fourth last week and was hoping to go one better and i did, so happy"


George Smith
"Not too bad, bit disappointed but i had nothing left, i could not follow Matt when he went after Ed so i just sat on really, bit disapointed but its still early season and its a long race and it went from the off as well, so it was a long old day out there. We got three of our riders into the break, we worked pretty well but it started getting tasty into the crosswinds. The wind was definitely harder than the hill, i was swinging quite a bit"

*The Severn Bridge race dates from the 1960's and this year returned to the Avonmouth roads the original organiser, the late Jack Turner used. 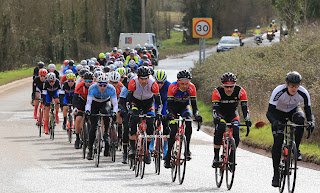 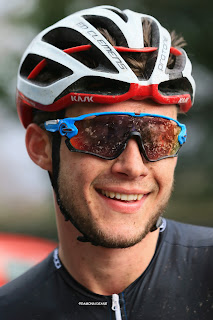 on March 05, 2017
Email ThisBlogThis!Share to TwitterShare to FacebookShare to Pinterest