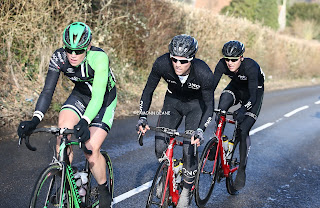 Speaking to the Portsmouth News Tim Elverson insists there is no room for complacency ahead of the Perfsd Redal!
Pedal Heaven’s directeur sportif is set to unleash his exciting Hampshire-based team on the Portsmouth road race on Sunday.
It will be a first outing for the squad since their elevation to UCI Continental status.
They will arrive as big favourites for the crown, following a superb 2015 season in which they topped British Cycling’s national team standings.
And while there are bigger and more lucrative challenges ahead for the Fleet outfit, Elverson has left no stone unturned in his pursuit of a first Perfs Pedal victory.
He said: ‘It is the start. And while it is not the first UCI or Premier Calendar event, every race for us is a chance to get out and make it happen.
‘We haven’t won it before. We have won most southern races at least once and quite a lot year on year, so we are keen to win on Sunday.
‘We have always had people in the break, we have always been active but we just haven’t quite done it.
‘We have only one thing in mind. I won’t be waiting for anyone else or reacting to anyone else. We will be racing our own race.
‘It will be a bit overkill. I’ll be there with an assistant DS, a mechanic and I’ll have a soigneur.
‘None of that is really required for a race like Perfs but I want to set the tone for the lads.
‘I think you go to every race to win, so why treat one different to another?
‘We will treat this with all the respect we would a Premier Calendar race.
‘It is going to be interesting and, to be honest, I can’t wait.
‘I can’t stand the messing around all winter. I just want to get on with it.’
Mitch Webber, Rory Townsend, Joe Fry, Grant Ferguson, Lloyd Chapman and Alex Paton make up the team.
Pedal Heaven will also unveil their new Excel Academy at the event.
Elverson hopes the squad will act as a feeder to his UCI team in the coming years.
But he has dismissed suggestions they will offer a helping hand to his premier riders on Sunday.
He said: ‘No, not at all. If we end up in a crosswind, my UCI boys will be riding for six riders. So if there is an academy rider in seventh, he will be in the gutter!
‘There will not be any special treatment and they certainly won’t be helping my lads out.
‘They will be parked in the car park away from us.
‘Don’t get me wrong, if one of them has a mechanical, they can come and use our mechanic.
‘But I would do the same for another team if someone was desperate.
‘On the road they are on their own, as a team of six, and hopefully one of them gets involved.
‘But make no mistake, we will attack them just like anyone else.’

Thanks to Rob Atkins

on February 12, 2016
Email ThisBlogThis!Share to TwitterShare to FacebookShare to Pinterest