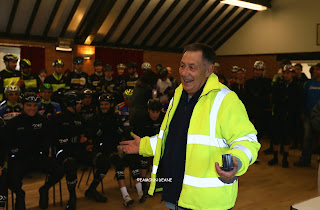 Mick Waite has shrugged off Storm Imogen and given the 51st Perfs Pedal the all-clear.
Record-breaking winds and heavy rain have battered the south coast in recent days.
But Imogen has now swept through the region, leaving the clear-up operation to get under way.
Waite, meanwhile, has inspected the course for Sunday’s 46-mile battle and declared it fit to race.
‘I was out there on Sunday and then went out again on Tuesday after the storm and it is fine,’ said the organiser.
‘I have one pothole and one puddle to deal with, I think.
‘But there is nothing there to stop it.
‘There is a lot of grit around and there will be some puddles but it’s February and it has been raining a lot.
‘They are all experienced riders, so they will know to use the proper wheels and tyres for this type of race.
‘If you are putting your best racing tyres on, you might not get very far!’
The biggest puddle is just outside South Boarhunt, near the bridge over the Wallington River.
And it is a familiar foe of Waite, who organises the race on behalf of VC ST Raphael.
‘It is exactly the same puddle we had a problem with when Alex Dowsett won the race in 2007,’ he said.
‘The forecast is for no more torrential rain, though.
‘They are saying we might get some showers and they could turn to sleet, but the temperatures are not set to dip below zero.
‘So it is looking really, really good.’
The peloton will tackle five circuits of Portsdown Hill – climbing up Swivelton Lane and James Callaghan Drive before descending the B2177 to the start of the loop at South Boarhunt.
The riders will then head for Newtown before climbing to the finish on Hundred Acres Road.
The race starts at 11am and is based at the D-Day Memorial Hall in Southwick.

on February 12, 2016
Email ThisBlogThis!Share to TwitterShare to FacebookShare to Pinterest