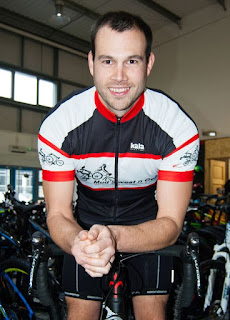 Lewis Stripp is relishing the prospect of working as part of a team as he approaches his fourth season of cycle racing. The 29-year-old, from Wyke Regis in Dorset, has previously sported the Mud, Sweat & Gears (MSnG) jersey as a club member. But this season he will be part of the company’s new race team.The squad will have the mechanical support of MSnG, which has shops in Weymouth and Dorchester. But Stripp, who has been something of a lone ranger on the racing circuit to date, is keen to embrace the team ethic. He said: ‘It is quite an exciting prospect to think you will have a team around you to work with and hopefully it will allow us to further our own ambitions more than we could do individually.
‘Rather than turning up for a race with 50 riders and there is one other guy who you saw at an event the previous week, now it will be a case of turning up with five or six other lads who you have been working with all winter.‘It has been great to be part of some structured training. We have been able to learn each other’s strengths and weaknesses.‘And the opportunity is there to work with more experienced racers, learn from them tactically and tap into their knowledge.‘Then there is the mechanical support from the shop, which is great. They have also been able put a package together to help us with kit. ‘It can be an expensive sport, so that backing is fantastic.’Stripp has largely focused on criterium and circuit racing until now. And while he expects to continue in that vein this term, he is also looking forward to testing his legs in road races.The category four rider said: ‘I want to get involved in as much racing for the team as possible.‘Hopefully I can start working my way up the categories in the British Cycling rankings.‘It would be nice to be in a position where I could be a cat three by the end of the year.’
Thanks to Rob Atkins
on February 09, 2016
Email ThisBlogThis!Share to TwitterShare to FacebookShare to Pinterest