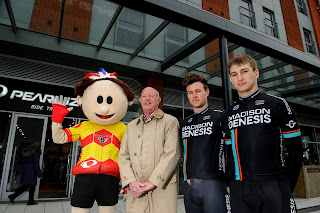 Matt Cronshaw is eyeing a memorable finale to the 2016 Pearl Izumi Tour Series in Portsmouth, writes Rob Atkins.......
The Madison Genesis rider has never raced in the city but reckons the circuit based around Guildhall Square will be to his liking.
And with his team gunning for back-to-back titles, the 27-year-old reckons it could be quite a night on Thursday, June 9.
Cronshaw, who hails from Carnforth in Lancashire, missed the Tour Series’ first visit to Portsmouth in 2010.
But since then he has racked up a record number of appearances and lifted the crown with Madison Genesis last term.
‘I missed the 2010 race, so this will be the first time I have raced in the city,’ said Cronshaw, talking at the launch of the Portsmouth round at the Pearl Izumi store in Gunwharf Quays on Saturday.
‘It looks pretty flat, so I’d say it will be fast and is one which might suit me, so I am quite looking forward to coming down.
‘Now Dean Downing has retired I think I have ridden in the most Tour Series rounds since its inception.
‘I am up to about 60 now. It is a really good series to be part of, especially with a team like Madison.
‘Over the five weeks you are living in each other’s pockets, travelling around together and staying in different hotels.
‘You really get to know your team-mates well and you end up riding better together because of it.
‘Being in that situation and going on to win it with the team last year was really quite special.
‘To share that every night and feed off it was great.’
Madison Genesis have lost the services of Mark McNally and Tom Scully.
New Zealander Scully won the opening round in Ryde last season but has since joined Aussie outfit Drapac and McNally has moved to Belgian team Wanty - Groupe Gobert.
The Milton Keynes-based UCI Continental outfit have been busy recruiting replacements, though, with Felix English and Alexandre Blain among those to sign up.
Cronshaw added: ‘We have a slightly different set up to the team this year, with Macca and Scud leaving.
‘They were two powerhouses within the team and really strong, reliable riders but with additions like Felix and Alexandre Blain we should still go well.
‘Felix is super quick. So while we might not necessarily be as strong across the board, he will elevate us in those sprint finishes.
‘And with only four riders counting this year, it is something we can capitalise on and hopefully repeat the success of last year.’

on February 21, 2016
Email ThisBlogThis!Share to TwitterShare to FacebookShare to Pinterest