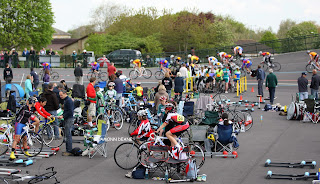 2013 to be the Busiest Summer Yet
BCC Press Release
With 3 out of the last 5 BBC Sports Personalities of the Year being cyclists and multiple Gold medallists in 2012, it is not surprising that the sports popularity at national level is also being reflected at Bournemouth’s Olympic Cycle Track.

Throughout the 2013 summer months the track at Slades Farm Ensbury Park is already booked 5 evenings a week, outstripping the other more established tracks at Portsmouth, Reading, Welwyn and Brighton. Adding to weekly Tuesday evening Track League of competition, there are no fewer than 4 Open Competition meetings scheduled at weekends, only the famous Herne Hill Track in South East London, with a 100 year head start on Bournemouth, has a bigger programme.

Track Cycling is now the dominant as well as most inclusive sport operating at Slades Farm, offering activities for both sexes in an age range from 5 to over 65. Of the local clubs, Bournemouth Arrow and the Poole Wheelers have made regular bookings to provide coaching and training opportunities for the benefit of their members, as well as promoting Open Competitions and Training for the wider cycling community.

Open Coaching Sessions will be provided by Feria Sport and Southern Cycle Coaching, some timed at School Holiday periods while others fill the “Afterschool” slot in term time. Weekday student usage is led by Bournemouth University but a significant number of local schools now book the track to provide their pupils with the challenge that is track cycling, with others travelling from Weymouth and Dorchester.

The Cycling Centre’s own very popular Sunday afternoon Open Rider Accreditation classes will provide novice and experienced riders with the Skills base essential for safe track riding thereby allowing them to progress to higher standard sessions.

Over the winter the Cycling Centre has invested in improved storage facilities and increased the fleet of special Hire Bikes from 21 to 34 to meet the demand. The Centre’s Alan McRae says ”The current limitations on Local Authority Funding is proving a frustration more than a barrier at the moment but there remain many ways in which we can further improve this fantastic facility in time. The investment made by Bournemouth Council and British Cycling in 2011 is providing huge returns. For me the highpoint of 2013 will be the Bournemouth Arrow’s DernyFest and Womens Omnium Competition on 13th July. This is not because it is a showcase of top track cycling competition, which of course it is. More importantly though, it forms part of a 3 day Community Festival organised by the Friends of Slades Farm bringing together music, dance and sport to both show off Slades Farm Open Space and demonstrate what contribution sport can make in bringing the local community together.”

For further information on the activities at the Centre and to make bookings see the Cycling Centre Website: and contact info@bournemouth.cc 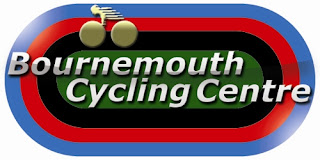 on April 05, 2013
Email ThisBlogThis!Share to TwitterShare to FacebookShare to Pinterest