TURBO training might be torture to many, but for Ben Boardman it brings results.
Hour-long sessions “do it” for Ben, with 40 or 45 minutes of power training translating into some classy rides out on the open road,writes Bob Jolliffe..................
With some good rides under his belt already this year, he scored a win in New Forest CC’s first evening 10-mile time trial of the 2013 season with a time of 23min 6sec to beat Southampton challenger, GA Cycles’ Gary Allan, by 22 seconds.
Third place went to Boardman’s New Forest CC clubmate James Bannister with a personal best of 23-35 on a none-too-easy evening on the Ringwood-Sopley course.
Fourth went to New Forest junior Hugo Walters with a quality 24-21 which beat his “minute-man” Stuart Peckham’s 24-56 and pushed him back to fifth. 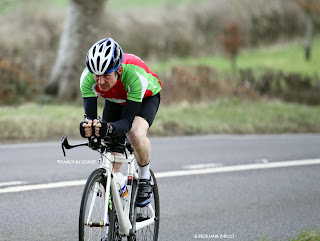 Heavy rain, flooding and the threat of hidden potholes on the course led to the postponement of Crabwood CC's 70th Anniversary 10-mile time trial south of Ringwood on Saturday afternoon. Organiser Claire Newman said she would investigate the possibility of running the event later in the year.

on April 15, 2013
Email ThisBlogThis!Share to TwitterShare to FacebookShare to Pinterest