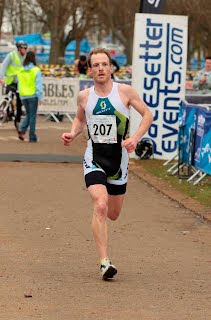 750M/20KM/5KM
Two months after winning the British duathlon championship, Phil Mosley (B’mth Cycleworks/Scott/ClifBar) couldn’t repeat his success this time around. A poor swim left him 95 seconds behind the leaders, and although he posted the day’s fastest bike and run splits he still finished 25 seconds behind first placed Roger Witz Barnes. His time of 58:31 was fast enough to earn him the title of British champion in the 35-39 age category. He wasn’t the only local medallist either. Despite still feeling tired from winning a gold medal at the European age group triathlon championships in Israel recently, Lymington Tri Club’s Barbara Walton was still fast enough to clinch a bronze medal in the 60 to 64 category. Amazingly, her time was still four minutes faster than she did two years ago at the same race (when she was only 61!). Keith Mahon from Zoom Tri also won a silver medal in the 50 to 54 category, which he can add to his ever growing list of triathlon achievements. All the more impressive is that he only started the sport a few years ago, and he’s now competing against several former pro’s in his age group. Another talented newcomer to the sport is Tony Rendall, who finished 18th in the 35 to 39 age group in only his second year in the sport.

Meanwhile local sensation, Richard Horton (Primera) got his triathlon career off to a winning start. Having become European Junior Duathlon champion in just two races, Horton was an emphatic winner of the Swanage Triathlon, finishing 10 minutes clear of the opposition. Horton lead from the front in the 750M Swim/20km Cycle/5km run in the Purbecks.