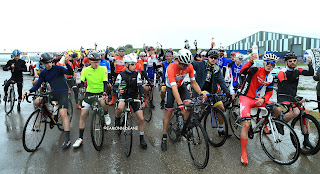 The Gillingham & District Wheelers "John Holman Memorial" was abandoned after a horse jumped a field gate into the peloton shortly after the start. With one rider needing hospital treatment the race was left without ambulance cover and with heavy rain continuing to fall the decision to call the race off was taken. John Holman, who passed away earlier this year, was a long time member of the Gillingham club and a great supporter of local racing,always marshalling and helping out. Before the race, riders toasted John with their bidons at a wet Henstridge Airfield on the Dorset/Somerset border. Barely a mile into the 60 mile race the horse cleared a 5-bar gate before scattering the peloton, Robin Burrow (Team Botrill HSS Hire) suffered a suspected fractured pelvis and was airlifted to Southmead Hospital,Bristol, the horse was later safely recovered. Several other riders suffered minor injuries including Kim Little (Merida Factory Racing) & Tom Clements (Off Camber) who both assisted the paramedics. Initially it was hoped to restart the race but with the rain getting heavier there was little enthusiasm from the cold wet bunch and with conditions worsening, Chief Commisaire Lawrence Heaven took the decision to abandon the event. Burrow told "LR,LR" "Im not great,i have multiple fractures on my pelvis and another on my spine,i was airlifted to Yeovil, stabilised there, then blue lighted to Southmeads. After operating the doctors have told me i will be hospital for two weeks and then on crutches for another 12 weeks. It was pretty traumatic!I am Very grateful to all those who helped , I'll thank people in due course,when i'm less spaced out!"