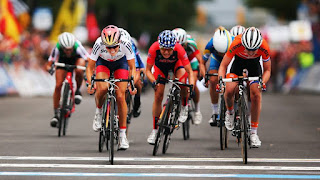 The 135km race, which begins in Lizzie’s home town of Otley, will be the first time Lizzie has raced in the world champion’s jersey in this country. The full Great Britain Cycling Team will be announced in due course.

Speaking of the event, Lizzie said: “The Asda Tour de Yorkshire Women’s race will be my first race in the UK in my World Champions jersey and it’s an absolute dream to be starting in my home town.”

British Cycling’s technical director Shane Sutton said: “To have a British rider wearing the rainbow jersey supported by British riders in a British race is something I’ll be very proud to see. Lizzie has had an outstanding season so far and I know she’ll do the jersey justice in front of a home crowd. I’m also pleased to say that we will be entering a second women’s team into the event, Team Breeze, which will be an excellent development opportunity for the female endurance academy squad.”

on March 23, 2016
Email ThisBlogThis!Share to TwitterShare to FacebookShare to Pinterest