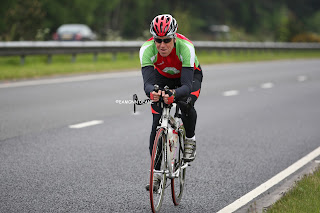 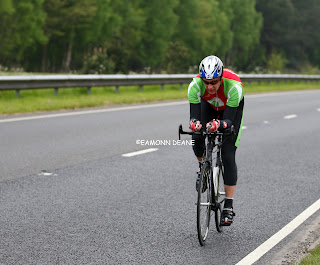 Triathletes Gary Lock and Rob Brinsdon did not start, reporting sick after picking up a bug while swim training.
Conditions were good for the event with little wind and no rain. That was reflected in the time of the winner, Northover Veterans’ John Winn who chipped two minutes off the course record reducing it to 1-47-44.
Second place went to Nicholas Gardner (Cadence RT) with 1-53-14 and third was taken by Winn’s teammate Mark Ashurst with 1-54-29.
The team award went to the Poole Wheelers’ trio of Terry Icke (1-56-56) Gary Dighton (1-58-12) and Paul Jones (1-58-45).
Rain stopped play
New Forest CC’s club 25 last Tuesday was cancelled due to the heavy rain and poor light.
Hilly Hundred
New Forest CC’s Graham Lenton enjoyed a good ride in the Hampshire Hilly 100 sportive which started at Sparsholt and took in the Meon Valley, Alresford and Stockbridge.
He finished in a time of 5-31-34, for first male veteran over 50 and ninth overall from the 493 who completed the distance. “I managed to avoid the rain, but not the strong westerly wind,” he said.
Whitewick out for Forest win
Former winner and course record-holder Stephen Whitewick will be going all out for another win in New Forest CC’s 32-mile Round the Forest time trial on Sunday.
His nearest challengers are expected to be his VeloRefined Aerosmith’s teammate James Gilfillan, CC Weymouth’s Greg Parker, Andy Bryson of Peter Hansford Racing, Poole Wheelers Gary Dighton and Terry Icke, and the Waterside’s Ray Claridge (GA Cycles).
New Forest CC’s Nick O’Hara could figure in the top 10. Another seven NFCC riders are due on the start line in Caird Avenue, New Milton from 7am.
The previous morning, Gary Lock is due to ride his first 100-mile time trial: The Hounslow and District Wheelers’ event at Farnham.

on May 20, 2013
Email ThisBlogThis!Share to TwitterShare to FacebookShare to Pinterest