Harper on a High as Felt-Colbornes-Hargroves RT Dominate on Stockbridge Down!

The six riders left at the bottom of Winton hill knew what was coming; they had all read the script! Correction! They had all written the script. James Shaw (Kuota-Spinergy-GSG) is no climber, when the move came he, like the rest of us was just a spectator, albeit a more hard working one. Andrew Hastings (Finchley Racing Team) also has no head for heights, his chance was to go for a “a long one” on the last lap, twice he tried, twice he failed. Chris McNamara (Pedal Heaven RT) was full of industry all day, permanently at the front of the race. He played his hand half way up the climb but the cards were well marked. Roy Chamberlain (Team Corley Cycles) has the experience but the legs are older now, he knew what to do but could not execute it. Only two left! Ben Stockdale (Metaltek-Knights of Old RT) has tasted victory on Stockbridge Down before, George Harper (Felt- Colbornes-Hargroves RT) saw the danger and took the fight too Stockdale, opening a small gap as they neared the top. The former winner hesitated, waiting for Harper to fade, it never happened, only one left now. Always near the front, always looking comfortable and well supported by his team, 20 year old Harper was a deserving winner. Stockdale, with few teammates, was forced to work too hard, labour for which he ultimately paid. 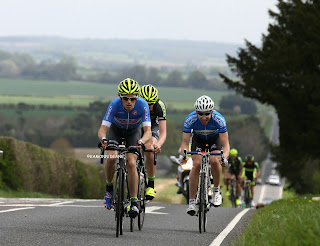 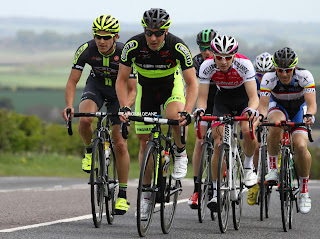 Harpers team-mate, Alex Higham had ignited the race just two miles into the 78 mile battle across Stockbridge Down in Hampshire. The six, thirteen mile laps provide a stern test of condition, strength sapping, rolling climbs, descents that quickly rise up again and rural roads that offer nowhere to hide. 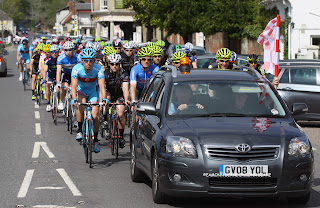 Higham was soon joined by Harper & Rob Ward (Felt-Colbornes-Hargroves RT), McNamara, Hastings, Grant Bayton (Ride 24/7), Harry Bulstrode & Phil Peters (Peter Hansford Racing) & Rob Yeatman (Dream Cycling). Bulstrode was quickly dispatched as the remaining eight moved clear, working well. Felt-Colborne was policing the bunch and the gap was growing. A second group of seven formed and the chase was on. Stockdale, Stewart, Chamberlain, Matthew Higgins & Pete Wager (Felt Colbornes-Hargroves), David Creegan (Pedal Heaven) & Douglas Coleman (cc Luton) worked hard to close the gap. Contact was made and the fifteen were 2 mins 45 clear of the shrinking bunch with just over two laps to go. The penultimate lap saw a natural selection take place as the miles started to tell, with just seven left at the bell and just under lap later it was down to that six. 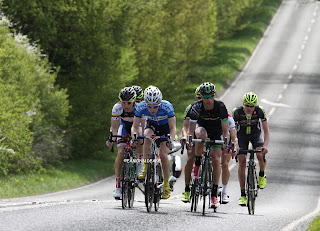 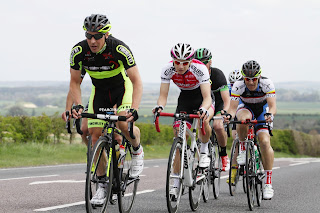 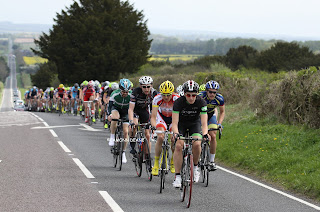 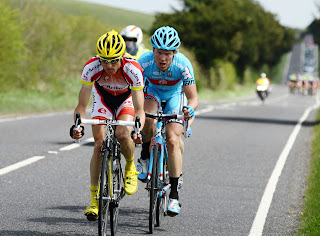 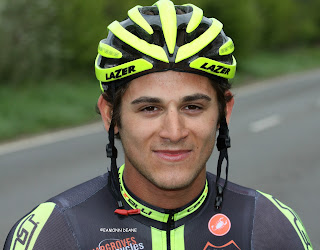 George Harper “ We attacked very early, just going through and off nice and steady, we sat up for the chase group, if people did their fair share we were going to stay away, some of the strongest riders were there. It just got whittled down, a war of attrition really, it’s a very tough course and this climb every lap, takes it out of people, its horrible, the surface over the top is really bumpy so it takes it out of your legs. Then just a bit of cat & mouse on the last lap, I was quite confident, I knew if I got to the hill feeling strong it would suit me. I knew Chris McNamara’s dig would be effective so I got on his wheel and went straight thru, I was a bit worried Ben would catch me up, he has a very quick finish. It’s a local race for me, I only live a few miles away, I am very pleased”
Ben Stockdale “ I would like to have got the win but we had to work hard to get across to the front group, with the two Felt guys sat on the back it was really just me, James & Roy doing the big turns. I was just a bit gassed at the end, to be fair George deserved it, he went from a long way out, I let him go as I thought he was going to crack, oh well a good work out I guess”
Roy Chamberlain “As you get older you can’t go from the gun, when it comes to the sprint you can’t go with the young guys, When we got up to the break it was a bit of a bunfight, it was a case of not hesitating, I have not got the acceleration. I am pleased with third, it’s a hard course, I think a Premier round here would be just carnage, I am doing the Lincoln GP next week, if I can get through the first two hours I will be alright, I love it!”
Chris McNamara “I was always wary as Felt had so many riders, it was cat & mouse on the last lap, I had a little dig half way up, then my legs fell off, George went over the top and just flew, he has such a good jump and a brilliant sprint as well, I was looking round the break thinking everyone is faster than me except Roy. That’s the best legs I have had in two years, I really enjoyed it”
Andrew Hastings “ I got in the initial move, we had three Felt guys there, I thought great they can drive it, it was quite clear that Alex Higham was riding for George, it was a little bit stop start on the last lap, a few little digs, the course just rolls all day, it is very tiring. I did not fancy an uphill finish so I had two big digs to get away, I had a decent gap a few miles from the finish but then all of a sudden they were on my wheel, a podium place would have been nice but I will take fith”
James Stewart “Content really, I am never going to be up there on that climb, it’s not my thing, a flat finish yes”
Grant Bayton “I managed to get in the first break, we were working well, quite smooth, but you kind of knew the lads would tire and another group would come across. Felt had numbers, they had it under control, Matt Higgins put a real big turn in to split it, it came back together but split again, I did not have the legs so it was goodnight Vienna for me. Felt rode well as a team, George rode well, he wasn’t showing he was the strongest” 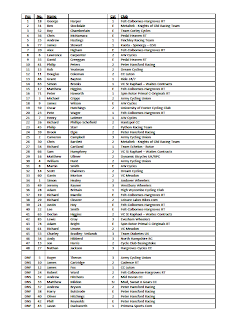 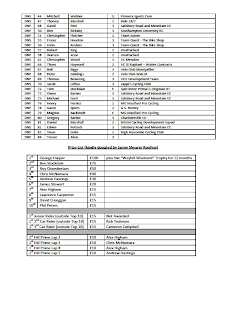 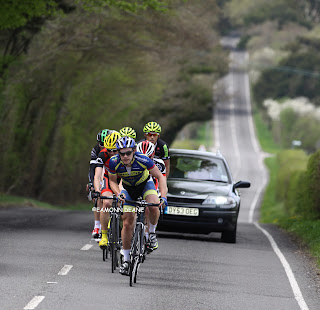 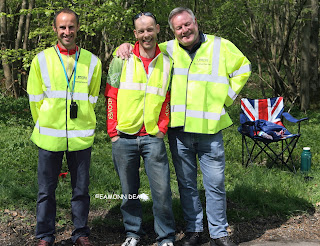 This Andover Wheelers promotion, sponsored by Jamie Shearer Roofing, was the first road race in the Southern region to use the new British Cycling Accredited marshals. The trained “super marshals” are authorised to stop traffic and Police at county level are keen supporters of the new system. Feedback from riders was positive with some likening it to closed roads. Marshals too, spoke of a good response from motorists, with some actually taking an interest in the racing, of course not everyone was happy but comments like “I pay my road tax, why should I stop” and “Why don’t you do this at five in the morning” were never going to ruffle the likes of Phil Bayton. Race Commisaire Gerrish Gray commented “This is the most significant development in British road racing ever because it effectively gives races closed roads apart from dealing with oncoming traffic” 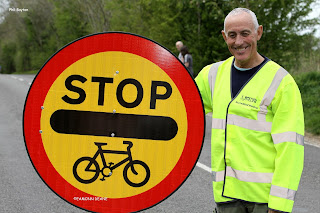 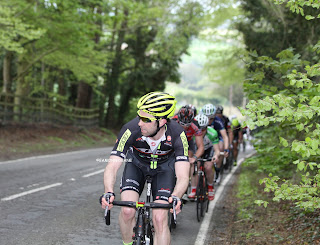 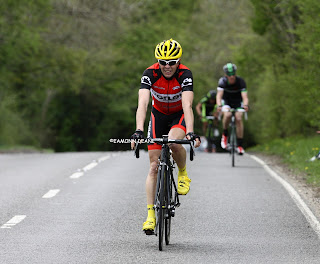 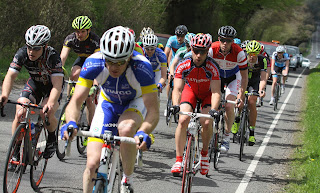 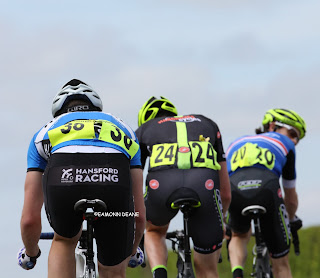 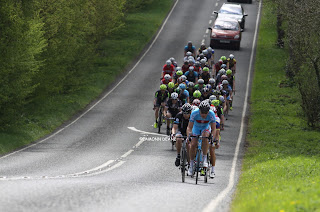 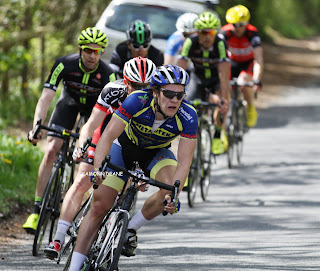 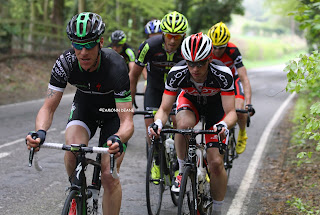 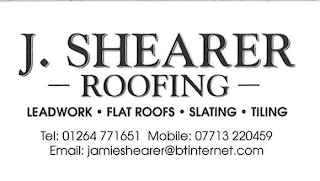 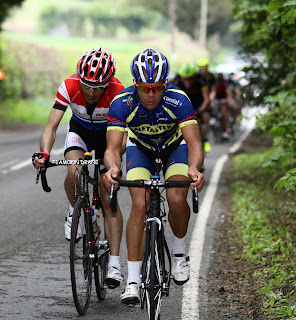 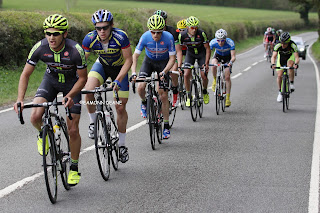 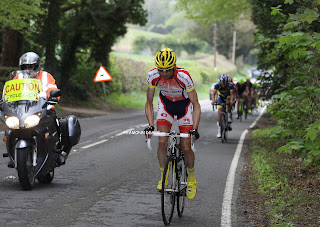 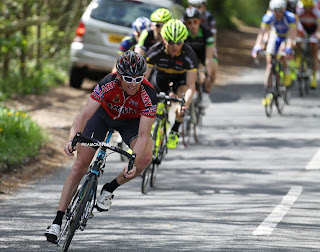 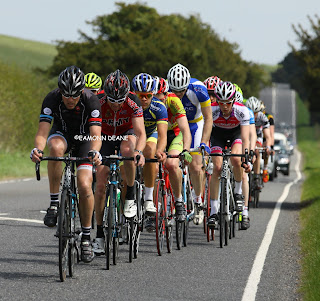 Full Results to come.
"Local Riders, Local Races" would like to thank all the riders who were happy to stop and chat after a tough day in the saddle.

on May 06, 2013
Email ThisBlogThis!Share to TwitterShare to FacebookShare to Pinterest