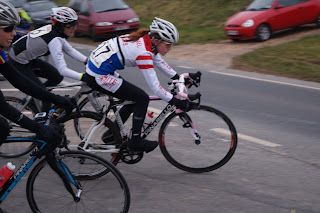 The third and final round of the Spring Time Pursuits in Devon were not only going to be a physical test but also a very tactical one, with both Ellie Gilham (VC St Raphael) and Natalie Grinczer (University of Birmingham) tied on equal points for the series victory after the previous 2 rounds.
The bunch were started in 3 separate groups all 1 minute apart with both Ellie and Natalie in the scratch group. The pace from the start was very quick with the scratch group catching both the other groups before half distance with Marianne Britten and Anna Fischer (both VC St Raphael) putting in huge turns. As in previous weeks all attacks were quickly chased down and the final outcome was down to the finishing sprint.
Natalie’s tactics were obvious from the start as she spent the entire race glued to Ellie’s rear wheel. As the bunch turned and started the long climb to the finish Anna Fischer accelerated hard at the head of the bunch, shredding everybody except Ellie, Natalie and Jenny Hudson (VC St Raphael). With approx. 400m to go Natalie launched her attack dropping both Anna and Jenny with Ellie the only person able to match her acceleration. At 200m Ellie made her counter attack and managed to get a comfortable gap to take the win and overall series.

When interviewed Ellie said “I didn’t feel great first thing but felt better as the race progressed. It was really nice to have such great team support today. The team were really pleased with the win. The hard work on the road and turbo over the winter is paying off. Can’t wait for Castle Coombe next weekend.” 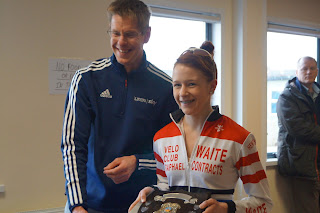 Thanks to Dave Gilham for report & photos
on March 02, 2013
Email ThisBlogThis!Share to TwitterShare to FacebookShare to Pinterest