News from the Wessex Group VTTA 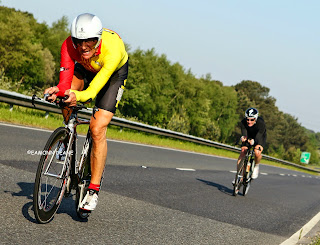 The period since my last notes has proved to be perhaps the most successful in my dozen or so years as Wessex recorder with four national age records achieved by our riders with times that most of us could only dream about even when in our prime. In addition many Group age records have fallen, writes Peter Warhurst.......

The two national record breakers are Terry Icke (70) and Andy Topham (45).On the basis of age before beauty I will lead with Terry. In my last notes I mentioned that following his 25 success (53:11 at 70) he was chasing the 10 record. This he duly achieved on 3rd August with 22:11. But deep down it was the 50 record for which Terry really yearned.

His first real attempt at this was in the CTT Championship 50 in which he disappointed himself with only 2:00:06. At the HQ afterwards he was overheard wondering if he should seek advice from Help The Aged! I am not privy to whether he actually did this but can say that a few weeks later in the Hants RC 50 he clocked 1:52:02 – just 1:34 short of Brian Haskell’s long-standing epic record. But the icing on the cake came in the Shaftsebury 50 on 19th July with a record breaking 1:50:56. Maybe this will prompt queues of veterans seeking advice at Help The Aged centres!

But perhaps they might be better advised to obtain a copy of Andy Topham’s book “Time Trialling – Fly Through The Pain Barrier” (stocked by Amazon), because Andy’s results prove that he knows of a training regime which works. His National age records are 50 in 1:38:27 in the BCA event on 28th June and 100 in 3:28:31 in the Icknield event on 1st June. To demonstrate that his training methods also inspire short distance prowess Andy has a 25 in 48:47 to show in June. On top of these results Andy took second place in both the CTT and VTTA National Championship 50s.
Group age records have been achieved by Bob West, still trundling his trike at 76, and our oldest contestant Norman Harvey at 81. Norman has bicycle 10 in 26:25 and 50 in 2:28:57 to be proud of.

ever to be listed in our Handbook (but may be in the Guiness Book of Records?). It is that husband and wife Steve Walkling (45) and Leslie Walkling (48) have made fastest time in each of the last 13 open time trials in which they have finished. These have included two 2up 10s in which it is fair to say they routed the field. In the a3crg event they finished a minute and a quarter ahead of the 2nd pair in 19:35. Obviously they have not hung about in any of the events, with Steve’s bests 10 in 19:35 and 25 in 50;17 and Lesley 10 in 22:41 and 25 in 57:27, both of the latter are Wessex ladies age records. 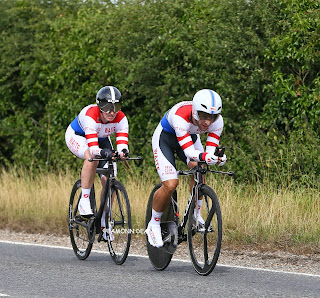 on August 20, 2014
Email ThisBlogThis!Share to TwitterShare to FacebookShare to Pinterest