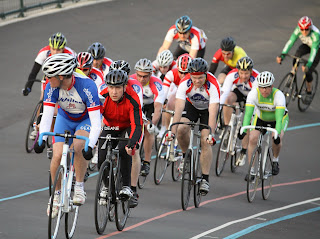 Each session will accommodate riders with a variety of ability levels and will include drills for the “fast boys and girls” and for those looking for something a bit less demanding. A structured warm-up will be followed by quality coaching sessions and over the course of twelve nights it is hoped that all track disciplines can be covered, including:


The coach will be Richard Eastham, a qualified and accredited British Cycling Level 2 Track Coach and is currently working towards his Level 3 Track Coaching certificate. Richard is a member of the Bournemouth Jubilee Wheelers cycling club and has been an active racing cyclist for nearly 20 years. He has won several medals in national track events and has taken part in elite road races across the UK, France and Ireland. Now aged 39, Richard competed on various occasions on the road and track against Mark Cavendish, Chris Hoy, David Millar and Bradley Wiggins when he was younger. They were always much better than him.
A minimum of 8 riders are needed for each session. All sessions cost £8. Hire bikes, should they be required, cost £3. Sessions start at 6.30pm through until 8.30pm on the following dates:

We hope to see you there!

on April 03, 2014
Email ThisBlogThis!Share to TwitterShare to FacebookShare to Pinterest