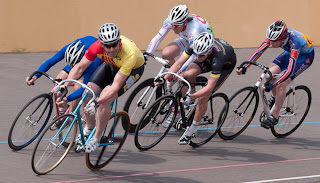 Time is running out to get your entries in for the Rob Jefferies/Eddie Beck Memorial. Entries close on 21st July, ONLY £15 full entry details HERE

This will enter you into a series of races (a scratch race, a roadman's pursuit, a devil take the hindmost and the grand finale points race) and give you the opportunity to win a range of prizes. The final, points, race has a 'prime' for every fifth of the forty laps, meaning that the first across the line will receive a prize every five laps.

But, to win it... you have to be in it! So get online and put your name down. Once again, enter here:

After a flurry of female entries into the Youth events, we can now announce an exclusive, girls only event. There are already a series of 'Roadman's Pursuit' events for the top tier (The Rob Jefferies Memorial) the support events (The Eddie Beck Memorial) and the youth As and Bs.

These involve the top six finishers in the warm up races starting at six equidistant points around the track. On the gun the riders have to go from a standing start and either eliminate the riders ahead of them by catching them, or avoid being eliminated by not being caught. The winner is either the only rider left over the course of 16 laps for seniors and juniors or 8 laps for youths, or the rider with the best time over the full distance.

As mentioned, to qualify for this event you are required to finish in the top 6 of the warm up race and, as mentioned, for youths this will involve separate events for youth a's, youth bs and the top six youth girls of either category.

Rob Jefferies was tragically killed in May 2011 while out on a training ride near his home in Swanage.In January 2012 eighteen year old Lee Cahill, from Wareham, Dorset, was given a 12 month community order and ordered to undertake 200-hours of community service and given an 18 month driving ban. Cahill had pleaded guilty to the charge of Causing Death by Careless Driving.
You can enter here but hurry, only two weeks left:
on July 09, 2013
Email ThisBlogThis!Share to TwitterShare to FacebookShare to Pinterest