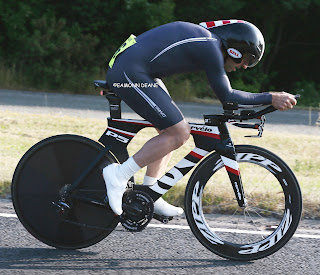 TOTTON’S Steve Whitewick took top honours in a close battle with former national 25-mile competition record holder Gary Dighton in Bournemouth Jubilee Wheelers’ 25 at Upton on Sunday. Bob Jolliffe reports.........
The day was warming up nicely when the first riders, tandem pair Simon Hall (Andover Whlrs) and Mary Corbett (Sotonia CC) took to the road at 7am. They clocked 1-2-40 for the course which features three laps of the Upton bypass.
Behind them the competition, like the weather, was hotting up.
First to beat the hour was Sotonia’s Philip Connell with 59-18. Bournemouth Jubilee’s William Soloman was next “under” with 58-48, then it was New Forest CC’s Stuart Peckham, a little off his best but satisfied with 59-28.
There followed a host of cracking rides including VC St Raphael’s Simon Berogna’s 54-20 for eventual fourth place, GA Cycles’ boss Gary Allan’s 55-47 and New Forest’s Ben Boardman’s 56-06.
Off number 70, Poole Wheeler Gary Dighton sped around to a flying 51-53. Starting two minutes later, CC Weymouth’s Greg Parker could not match Dighton’s power and finished 2min 2sec in arrears.
It was down to last starter Whitewick (VeloRefined Aerosmiths) to drive home the final nail and he finished with 51-43, just 10 seconds quicker than Dighton.
Other Southampton area riders: Nick Tarmey (Sotonia) 56-08, Stephen Wood (Antelope RT) 56-59, Simon Barnes (GA Cycles) 57-19, Rob Ellis (VC St Raphael) 1-0-25, Richard Blake (Antelope RT) 1-1-16, Colin Crocker (Sotonia) 1-3-14, Norman Harvey (Sotonia) 1-11-31, Bob Jolliffe (NFCC) 1-12-48. 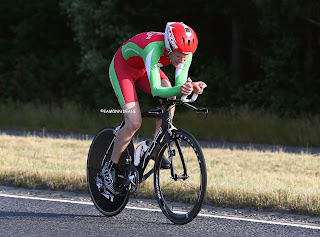