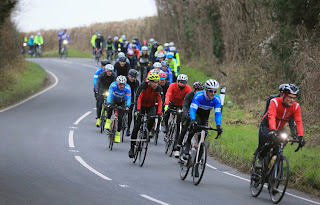 Fifty nine riders showed up at Merley for the Bournemouth Jubilee Wheelers 75 mile reliability trial on a dull, listless January morning. The third in the 4 ride series, the 75 is always a challenge, its place in the calendar and the relentless route always exposing those who have let things slip over the festive period. The anti-clockwise course heads north to Cranborne, Damerham, Rockbourne and Coombe Bissett, the conversation comes easy. Its the 6 mile drag up to Shaftesbury along the wonderfully muddy Ebble valley road that focuses the mind and puts an end to the chatter. The decent of St Johns Hill is fast and soon leaves the Saxon town behind as it leads to Sturminster Newton and the 50 mile mark. Regulars look for a good wheel to follow knowing the long, steep climb of Okeford Hill is close and will decide todays bragging rights. Once over this heartbreaker the scream down to Blandford Forum and the obligatory burn up through Langton Long and the Cowgrove are pretty much all that's left. First or last, all had earned their tea, bacon rolls & cake back at Merley and the favorable weather conditions saw 58 signing back in, the fast men home inside 4 hours!
The Jubilee reliability trials have been running for some 40 or 50 years, club archives are frustratingly short on detail but club grandees reckon the late 60's, early 70's. Open to all, members of Bournemouth Arrow, New Forest CC, CC Weymouth, Purbeck Peloton, Poole Wheelers and UK Biking regulary support the Bournemouth club and this long running series.
The final round of the 2018/19 Reliability series is the 100 mile event on 3rd February. Starting from Merley at the earlier time of 08:00, there is also a 100km option.
3rd FEBRUARY 2019 100 MILES in 8 FROM 08:00 (100 KM OPTION)
2019/2020
3rd NOVEMBER 2019 50 MILES IN 4
8TH DECEMBER 2019 100KM IN 4:40
5TH JANUARY 2020 75 IN 6 (tbc)
2ND FEBRUARY 2020 100 IN 8 (tbc)