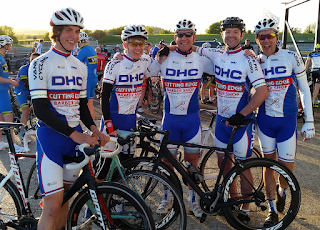 Dave Harding Writes........
The DHC Race Team
This weekend sees the team launch of 'DHC Racing'. Dave Harding has been busy organising the re-launch of his team over the last six months. A big thank you goes out to the team sponsors. Several sponsors came on board early on to help financially. Dave is looking to repay their faith with an awesome looking kit and a bunch of enthusiastic road racers to fly their flag on the kit. I'm sure you agree the team kit looks awesome. Dave has assembled an enthusiastic and friendly team of racers; the emphasis being on team work rather than individual effort. The team is all inclusive and not elitist.
The DHC Cycle Club
The DHC cycle club is in its infancy at the moment but will play a larger part and more of a role within the ‘DHC family’ in the coming months. For those looking to race - a launch pad towards the team if you will. But the Club will also be a place for more relaxed club runs and training rides. The DHC cycle club will take on the other cycling disciplines such as Time Trials and Cyclo Cross etc. You can keep an eye on these plans at the DHC website as they progress.
Matthew Downie
A mention has to be made regarding team racer Matthew Downie’s recent racing achievement. Mathew took 3rd place and a bronze medal at British Cyclings regional men’s junior road race championships. Matt animated the race completely and was leading the race on a solo breakaway for three laps before being caught on lap 6. Unfortunately Well done Matt a great attacking race.
Team Launch
Team launch is this Sunday 24th May. Pics and press release next week. If you are interested in joining our ranks we would be pleased to hear from you. Contact details below.
Website : www.dhcracing.com
Team Sponsors :
Cutting Edge Barbers, Sholing, Southampton.
www.julianporter.com
www.crystalclearsigns.co.uk
www.vankru.com
www.firstport.com
The Old Bakehouse Tearooms, Beaulieu, New Forest.
DHC Racers : (in no particular order)
John Makepeace, Daniel Sahota, Jules Shepherd, Julian Porter, Lou Otway, Steve Witcher, Matthew Downie, Martin Turner, Edward Rowe, Andy Mackay, Fred Taylor-Young, Gary Hill, Sean Williams, George Birkett, Ant Gritton, David Doherty, Dave Harding
If you would like more information about anything DHC please e-mail
Dave Harding : dhcracing@yahoo.co.uk

on May 21, 2015
Email ThisBlogThis!Share to TwitterShare to FacebookShare to Pinterest