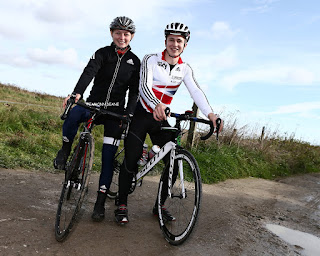 Alex Jolliffe and Rebecca Raybould have both been named in the British Cycling Senior Academy programme for the coming year. The Dorset pair graduated from the junior academy and will be based in Manchester as the programme begins another 4 year cycle, building up to the Tokyo Olympic Games in 2020. Raybould lifted the junior world scratch race title at Aigle in Switzerland in July. Weymouth-based Raybould, a former Bournemouth track league rider enjoyed a successful summer, the world title coming after she had won two bronze medals in the team pursuit and points race in the junior Europeans in Montichiari, Italy. Jolliffe took bronze in the team sprint after finishing 4th in the match sprint at Montichiari. Jolliffe, also from Weymouth placed 9th in the Keirin and 23rd in the Kilo at the first World Junior Championships. Also named in the squad is Petersfield-based I-Team rider, Joe Trueman.
Senior Academy Squad announced 29/09/16

on September 29, 2016
Email ThisBlogThis!Share to TwitterShare to FacebookShare to Pinterest