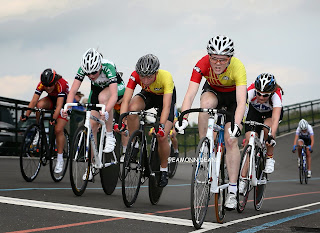 Local youngsters, Eve Jefferies (above), Alistair Fielding (Poole Wheelers) & Charley Calvert (Bournemouth Arrow) have been invited to become Olympic development Apprentices, as part of the Great Britain cycling team. All three have been identified as, “hard working, skilful bike racers who have the potential to develop into world class athletes in the future” The programme is aimed to support young riders typically aged 14-15 years with the transition into the junior ranks by further developing their skills both on and off the bike. The trio have benefitted greatly from regular access to racing and training at the Bournemouth track at Slades farm. Opened in 2011 the velodrome, part funded by Bournemouth Council & British Cycling,, is already producing a legacy, with track league regulars, Becky Raybould & Alex Jolliffe (Poole Wheelers) selected for the Olympic Development programme last year. Jolliffe, Fielding, Raybould & Jefferies all will ride in the Hoy future stars competition at the upcoming Revolution Track series. Jollffe will guest for Orica Greenedge while Raybould & jefferies have been invited by Rapha Condor JLT with Fielding riding for Madison Genesis.
The Revolution Series series starts on Saturday, October 25 at the Olympic Velodrome in London and runs through to March which three rounds at Manchester, one at Glasgow and another back in London. 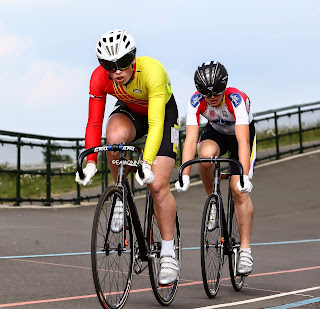 Fielding & Calvert
on October 21, 2014
Email ThisBlogThis!Share to TwitterShare to FacebookShare to Pinterest