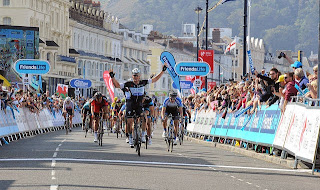 Renshaw, so often the creator of wins for others, grabbed a much deserved slice of the glory himself in Llandudno with a memorable victory that saw the general classification riders and sprinters mixing it up during a thrilling descent off the Great Orme.

As the race swooped along the North Wales coast and down off the final SKODA King of the Mountains climb of the Great Orme, it developed into an entertaining free for all with no sprint trains as such, and for a moment it looked like Swift was heading for line honours. Renshaw, however, sensed from years of experience that the Team Sky man might have gone a bit early and fought for his wheel before unleashing his own devastating finish. 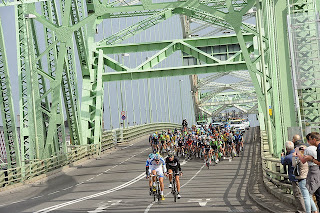 The win, Renshaw's first in Omega Pharma Quick-Step colours, is his second in the Tour of Britain, his first coming in Exmouth, which the race visits this year on Stage Five, in 2011, while consolation for Swift was the Chain Reaction Cycles Points Jersey, and second spot overall, just four seconds away from Renshaw's Friends Life Yellow Jersey.

With Mark Cavendish having to take a back seat nursing a huge haematoma on his left thigh after his Stage One crash, Renshaw, along with Niki Terpstra and Michael Kwiatkowski were given a free rein to do whatever felt right hurtling down from the Orme into Llandudno itself.

Kwiatkowski, one of the leading GC contenders for the week set the cat among the pigeons by pulling out a lead on the descent but Sire Bradley Wiggins, looking in ominously good form and descending like he did in his Tour de France pomp, effortlessly pulled that back and then did everything possible to keep Ben Swift in contention for the stage.

The impressive Kwiatkowski, still going strong, did a good turn by riding in his wheel for as long as possible to ensure that any rider trying to overtake Renshaw would have to go around the long way.

Behind Swift came Team NetApp Endura's Sam Bennett, and Garmin Sharp's Tyler Farrar, who had also showed his hand on the ascent of the Great Orme.

"That was pretty exciting especially that last 5-kilometres, I would imagine it would make pretty good TV," said a breathless Renshaw afterwards. "Nobody in our team knew the finish so we were going by word of mouth and the road book but it certainly suited me. I've got good legs after the Tour de France and was going very well.

"It was a shame that Cav crashed yesterday, it would have been the perfect sprint for him in my wheel but he is still trying to recover a bit. It's pretty amazing he is still in the race really. He had extreme pain today.

"It's great to reward the team with a victory, it's the first time I've been able to do that. It's a fantastic feeling. Over the years I have learned to get that feeling from helping other riders. I've dedicated a big proportion of my career to helping other guys. Not only Cav but Boasson Hagen, Henderson, Griepel, Hushovd - great riders - but it's always nice to win a race personally.

"We were a bit down this morning to be honest. Once again our leader had taken a big hit. Mark is our leader, we are right behind him, we ride the whole season for him. He is one of the biggest champions of the sport. I came to the team to help him 100%. Even when he is not feeling good I will dedicate my efforts to him. Even on a day when he is just at 80% he can win a bike race, he is that kind of rider.”

Having once again been at the front of the action, Liverpool's Mark McNally retained the SKODA King of the Mountains jersey, and also picked up the day's Rouleur Combativity Award.
The An Post Chain Reaction rider had featured in the day's final breakaway group, also including Ian Bibby, Chris Lawless, Lasse Hansen, Pablo Lastras and Rob Partridge, the latter of whom was in the break through his home town of Wrexham.

Once into Conwy county the peloton, led by Sky's Bernhard Eisel, set about decimating the group's three minute plus lead, with just Hansen, Lastras and McNally remaining as the race hit the Great Orme, and those trio were soon swallowed up as a succession of riders chose to attack.

In the YodelDirect Sprints classification Sonny Colbrelli of Bardiani CSF retains the jersey, while Omega Pharma Quick-Step's successful trip to North Wales was rounded out by taking the lead in the Friends Life Team Classification.

Stage Three sees the Friends Life Tour of Britain remain in Wales, with Monmouthshire's Tumble mountain above Abergavenny set to play host to the first summit finish in the Principality, at the end of a 180-kilometre leg south from Newtown, through Powys.

Highlights of Stage Two are on ITV4 at 2000 on Monday 8 September, with live coverage resuming from 1300 on Tuesday on ITV4, for Stage Three from Newtown to the Tumble

on September 08, 2014
Email ThisBlogThis!Share to TwitterShare to FacebookShare to Pinterest