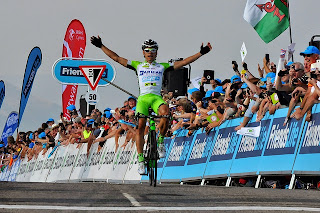 The Friends Life Yellow Jersey changed shoulders for the third consecutive day as Edoardo Zardini claimed victory atop the Tumble mountain above Abergavenny.

The Italian was first across the line at the summit, heading Michal Kwiatkowski by nine seconds, with Sir Bradley Wiggins leading in a small group in fifth, a further five seconds back.

The win puts the Bardiani CSF into the Friends Life Yellow Jersey, giving the team control of two of the jerseys, with teammate Sonny Colbrelli retaining the YodelDirect Sprints Jersey for a third successive day.

On a glorious day plucked from mid-summer Zardini attacked from the moment the peloton turned left on the Tumble, one of the toughest climbs in Britain rising 500m in just six kilometres. Neither looking back nor forward but just operating in his own zone Zardini danced rhythmically on his pedals and with the bigger names marking each other soon pulled out an advantage.

Having ridden initially with Garmin Sharp's Jack Bauer from the foot of the climb, Zardini struck on alone, before eventually Nicolas Roche of Tinkoff-Saxo decided to chance his arm and accelerated to join the young Italian and then, hitting a good patch, pulled ahead himself. Just for a moment the Irishman looked to be heading for the stage victory himself but the determined Italian was far from done.

Pacing himself nicely Zardini, 24, stormed back in the final two kilometres and took line honours along for probably the best win of his career alongside his win in Stage Two of the Giro del Trentino earlier this year. It also catapulted him into the Friends Life Yellow Jersey.

"I live in Verona and today was very like many of the training rides I do around my home in Verona so it suited me fine," said a delighted Zardini afterwards. "I knew this climb had the reputation of being possibly the best in Britain and it lived up to its reputation. It very tough but for me it was a beautiful climb today.

"I was never in trouble when Nicolas came up to join me. After attacking I was pacing my effort because I knew there would be more to do. I let him go past and perhaps I kidded to be tired a little bit but actually I was feeling fine all the time and soon decided to go back on the attack. I felt fantastic and was able to enjoy the moment and all the support of the fans at the top.

"We are not a big team but we enjoy taking on the big team and we have had great success. We won three stages of the Giro this year and last year Stefano Pirazzi won the King of the Mountains at the Giro.

"We have come here to be aggressive and to race and we will fight hard to defend the jersey. I think we will probably need to try and find some more second somewhere in the other hard stages because obviously riders like Wiggins and Kwiatkowski will be very strong in the Time Trial. It will be difficult but we will try.” 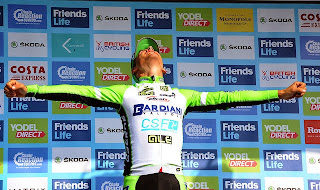 Behind Zardini the better known riders were fighting out an enthralling contest on the 179.9km run from Newtown to the top of the Tumble, basically the top of the famous Blorenge Mountain above Abergavenny and Blaenavon.

Kwiatkowski finished very strongly nine second behind the Italian while Roche, who at one stage looked certain to pay for his earlier effort, clung on bravely for third place a further two seconds back. Rising Belgian star Dylan Teuns finished next on the same time while Wiggins arrived 14 seconds back behind the winner in fifth place.

As usual Wiggins opted to set his own pace and time trial his way up the mountain rather than react to the attacks in front of him and with David Lopez keeping him good company all the way to finish in good shape.

His stated aim before the race was always to limit his losses on the Tumble, which he has done, and then work hard towards a possible showdown in the short time-trial on the 8.8km London circuit on Sunday.

In the Friends Life General Classiciation contest Kwiatkowski is now second behind Zardini at 13 seconds, Roche third at 17, Teuns a further four second seconds back and Wiggins fifth at 24 along with teammate Lopez.

The Friends Life Tour of Britain returns to Worcestershire after a five-year absence on Stage Four, for a 184.6-kilometre leg from Worcester to Bristol, which culminates with the climb of Bridge Valley Road up to the finish on Clifton Downs.

Highlights of Stage Three are on ITV4 at 2200 on Tuesday 9 September, with live coverage resuming from 1300 on Wednesday on ITV4, for Stage Four from Worcester to Bristol.
on September 09, 2014
Email ThisBlogThis!Share to TwitterShare to FacebookShare to Pinterest