Tour of Britain,Kwiatkowski in Yellow after Stage 4 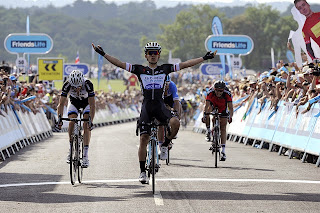 A searingly fast finish from Michal Kwiatkowski saw him become the fourth Friends Life Yellow Jersey of the 2014 race, as the Pole won the Worcester to Bristol leg of the race.

The Omega Pharma Quick-Step rider took an imperious stage win on the Clifton Downs with a victory that seemingly makes him the man to beat for the overall title at the 2014 Friends Life Tour of Britain.

Starting the day in second place in the Friends Life General Classification, 13 seconds behind Tumble winner Edoardo Zardini, Kwiatkowski appeared on the start line at Worcester in his speedline skin suit. He wanted the stage win and he wanted the ten second time bonus even though it was by no means certain how the testing 185km run from Worcester through Worcestershire and Gloucestershire was going to play out.

For a long while it appeared that the remnants of an eight man break might stay away and mop up the bonus seconds but as the peloton gathered pace down the wide open Portway along the Avon Gorge and swung onto the SKODA King of the Mountains climb of Bridge Valley Road they quickly cut into the two minute advantage which had set the GC riders on red alert.

Jack Bauer and Albert Timmer though were alert to the threat and attacked hard up the short but fierce Category 2 climb up and for a long while looked set to take the honours in Bristol. Only Nicolas Roche and eventually Kwiatkowski started to chase but with just 250 metres to go it still seemed possible that Bauer, the New Zealander and Timmer, from the Netherlands, might stay away but fatally the slowed little to consider their finishing options.

Kwiatkowski, 24, was already travelling at extreme pace around a sweeping right hand bend - it is just possible the leading duo didn't see him - and as he shot by it suddenly seemed like everybody else was back pedalling. Timmer hung on for second, and the day's Rouleur Combativity Award, while a fast finishing Dylan Teuns nipped in for third place in front of a tiring Bauer, moving him up to third overall.

It was a hugely impressive finish by the fast emerging Polish rider who on this form should be a contender for the World Championship Road Race in Spain later this month on a course that would appear well suited to his particular talent.

"It might have looked like I came from nowhere right at the end but we really worked for the win," said a delighted Kwiatowski who also earned a fine second place during Tuesday's summit finish on the Tumble. "It was not a 'classic' sprint and I certainly didn't expect such a hard climb at the end.

"The attack form Nicolas Roche was really impressive which I followed and I don't think the two leaders thought we would catch them. I went into the last corner with nobody on my wheel and I was very happy to finish like that. There was some amazing work form my team especially Niki Terpstra and Julien Vermote to close the gap. That was not an easy thing. We took the responsibility for the chase.

"The climb was very important. We didn't really know when the end was coming! I kept pushing and pushing and when I saw the last 1-kilometre sign I remembered that the finish was much flatter so there was still a chance to sprint. What made it difficult today is that you started the climb from nothing because you have that 180 degree turn at the bottom. You take no speed into the climb which is why it was so important to stay out up in the front.”

The Friends Life General Classification situation now sees Kwiatkowski lead Zardini by three seconds with Teuns and Roche at 14 second, Movistar Team's Ion Izagirre at 23 seconds and reigning champion Bradley Wiggins now 27 second behind in sixth position. Although there are three demanding stages before the final day in London the short 8.8k time-trial on Sunday morning is beginning to loom large.

"I don't really know what my time trialling form is like," insists Kwiatkowski who earlier this year won the Prologue at Tour of Romandie and the individual time trial at the Tour of Algarve. "This is only my second race back from my long break after the Tour de France. I can time trial well but this is pretty short and I don't know if I am ready for that.

"We will see. I should be ready because we at Omega have the team time trial at the World Championships which we are preparing for. I normally like short time-trials but I don't know how technical the course is in London. We must look. I like them to be technical as possible.”

The GC loser on the day would appear to have been Wiggins having allowed the dangerous Kwiatkowski to open up a lead that even the Olympic Time Trial champions might not be able to claw back on Sunday, especially on such a short quickfire route where the non-specialists are much more at home.

"It was not the perfect day for us," admitted DS Nicolas Portal. "We had hoped for a different scenario. We always expected guys like Chavanel and Kwiatkowski would attack, and gain some time.

"With three kilometres to go, with that hairpin turn before the climb, our plan was to get there in the first 15. Before the turn it was nearly perfect, but Brad suddenly got lost just before it, so Ben Swift had to do a strong effort to bring him back up. But then there were lots of attacks.

"Brad is a good time triallist, but so is Kwiatkowski. We will try to get some bonus seconds back. But there is going to be a big fight for stage wins, Kwiatkowski and Chavanel will be there, they're both punchy. It's going to be exciting racing.”

Elsewhere Mark McNally of the An Post Chain Reaction team retains his lead of the SKODA King of the Mountains competition while the YodelDirect Sprints jersey moved onto the shoulders of Sebastian Lander of BMC Racing, who spent the day on the front in the breakaway.
Kwiatkowski's win, along with fine placings in Llanduno and on the Tumble see him usurp Ben Swift in the Chain Reaction Cycles Points Jersey, while Tinkoff Saxo lead the Friends Life Team Classification.

Thursday sees Devon host its annual Friends Life Tour of Britain stage, the seventh year that the race has visited the county. Stage Five sees the riders heading from Exmouth to Exeter, via Dartmoor, including the SKODA King of the Mountains climb of Haytor, where last year's summit finish was held.

Highlights of Stage Four are on ITV4 at 2000 on Wednesday 10 September, with live coverage resuming from 1300 on Thursday on ITV4, for Stage Five from Exmouth to Exeter.

on September 10, 2014
Email ThisBlogThis!Share to TwitterShare to FacebookShare to Pinterest