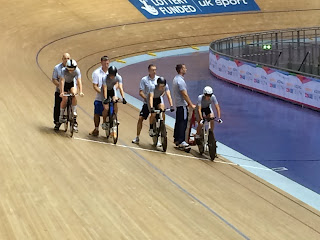 The local area was well represented at this years Sainsbury School Games where more than 1,600 talented school children from all over GB competed in 12 sports over 4 packed days of action.

Eve Jefferies, Becky Raybould, Ali Fielding all from Poole Wheelers and Alex Jolliffe from Team Terminator all represented the South region in the track cycling at the Manchester Velodrome. The team made up of four girls and four boys competed across nine different events including individual sprint and endurance races as well as team sprint and team 3km pursuit against 12 other regional teams and an invitational team from Brazil.

Day 2 was a hectic day with the Keirin, 2k individual pursuit, 500m TT and Madison. Raybould won the B-Final in the girls Keirin but it was Jolliffe that secured the best result of the weekend with a silver medal in the same event. Jefferies set a PB of 2.41 in the girls team pursuit to finish in 11th position and then followed this up with another PB in the 500m TT finishing a very creditable 5th. In the boys 500mm TT Jolliffe the National Champion was the last to race and despite his best efforts had to settle for the bronze position with the top three split by just 0.063 secs! Raybould competed in a very fast and furious 80 lap Madison finishing 5th with her partner from Bristol. 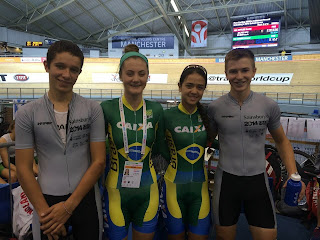 The final day saw the team events and some great racing. In the girls team sprint Jefferies and Raybould made it to the 3rd/4th place final where they narrow lost the bronze to a strong Welsh side. In the boys sprint the team hopeful of a medal unfortunately suffered a rider unclipping from his pedals and the team not able to record a time.

The final day ended with what was arguably the best races of the weekend with both the girls and boys teams making it through to the 3rd/4th place final ride offs. The girls fielding only three of their four riders due to illness rode a really strong race only to be pipped across the line by a West Midlands team fielding a four time national champion. The four boys inspired by the girls performance overcame their disappointment of the sprint finals producing a superb race to comprehensively beat the home favourite North West team to take a brilliant bronze medal and lots of smiles.

The team finished the superb event in forth position trailing the winners North West runners-up South East and third placed Wales.
Thanks to Chris Jolliffe
on September 22, 2014
Email ThisBlogThis!Share to TwitterShare to FacebookShare to Pinterest