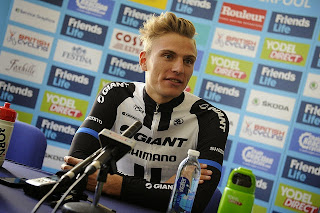 Marcel Kittel claimed his fourth win in five races in the UK this year when he took flight under the Liver Birds down the Strand in Liverpool for victory in the opening stage of the Friends Life Tour of Britain.

The German outsprinted Nicola Ruffoni and Mark Cavendish in Liverpool, to win the stage and take the race lead and the first Friends Life Yellow Jersey of 2014.

The powerful Giant Shimano rider, making his debut in the race, has now tasted success in Belfast at the Giro d'Italia and took two of the three stages held in Britain during the Tour de France Depart as well as this latest win in Liverpool.

Kittel outsprinted Ruffoni and Cavendish, although it was Adam Blythe who had led the initial dash for the line, but the NFTO rider faded to finish well down the order. 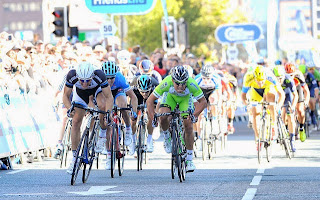 Although finishing third, for Mark Cavendish it was another painful day on British roads in a season where ill fortune has increasingly dogged him. Having already experienced a bizarre delay with a cleat problem on lap three of the 13.8km circuit, he then crashed three laps from the end after he and lead-out man Mark Renshaw were hurrying back to the peloton following a comfort break. Riding in the shadows on a blindingly sunny afternoon they went into the back of a team car and both fell to earth.

Both remounted and rode hard to regain contact with the peloton who slowed slightly to ease that process but Renshaw indicated he wouldn't be able to help at the finish so Cavendish was alone at the death, narrowly beating Garmin Sharp's Tyler Farrar for fourth.

Kittel meanwhile enjoyed a relatively drama free race although his team's decision to hug the right hand barriers down the finishing straight was perhaps fortuitous thereby missing the disruption down the left caused by Ian Stannard's spectacular crash, in the closing kilometre.

"It was pretty messy but luckily we took the decision to stay right,” said Marcel Kittel following the stage. "To start with I thought perhaps it was the wrong decision - we had made it earlier in the race - because there were not too many gaps but then there was a crash on the left and that allowed us to move up to the front.

"Tom Veelers did a really good job keeping me out of the wind so I could save myself for the sprint and that made it possible. I don't know how badly Mark [Cavendish] was hurt in the crash I didn't see it but he still tried to sprint at the end.

"It is hard work with just six man teams. We saw that today When Mark crashed and the bunch stopped riding for a while - so we then had to work hard to get the breakaway back, luckily Sky helped us.”

Kittel clearly loves the British roads, while if you include his second Giro stage win in Dublin that is now five wins in six races in the UK and Ireland.

"I am really happy to see all the fans here and to get a warm welcome, it's been pretty successful here for me. Maintaining the form has been hard. The season is long, I started at the Tour Down Under in January and here I am at Tour of Britain nine months later. And I will be riding in the Team Time Trial at the World Championships and a couple of races after that.

"I have definitely had ups and down. It's really about keeping fresh and enjoying the time - sometimes I go mountain biking and just having some fun with the team and not to be too serious.”

The large Liverpool crowds also had some home success to cheer, with An Post Chain Reaction's Mark McNally in the day's break, collecting the SKODA King of the Mountains jersey.

"It was a nice day out - I probably had too many friends and relatives out there to count – my girlfriend, the whole gang. The plan was for one of us in the team in the team to go for the breakaway. That always has to be the aim on the first stage. The first time I let the other guys in the break fight it out for the Sprints and it worked out quite nicely for me in the KOM. It's local roads for me in Stage Two so I will be up for the breakaway again buts it's a long week. We will see how it goes"

Speaking afterwards to his Omega Pharma Quick-Step team, Mark Cavendish said; "I was coming back after and I was behind a car. Someone had to stop for a puncture so the car slammed on its brakes, and there was an island in the road. If I went right, I would hit a traffic island, so I went left and I whacked another car. I hit it with my left leg and I was down on the road. I felt immediately a lot of pain on my quadriceps. It took me a lap to come back even because our team car couldn't assist me immediately because it was on the front. At that point I wasn't planning to sprint either, it was painful. But after a couple of laps we decided to just try anyway, but sprint seated because I was in pain. I still got third, but it's a shame because I really wanted to try and win in front of the British public. But accidents like this are a part of cycling and it's just a matter of bad luck. I really hope that the luck turns in the next days..."

Stage Two sees the Friends Life Tour of Britain remain on Merseyside with Knowsley hosting the start of the second day of racing. Riders will then tackle a 200-kilometre day through North
Wales, finishing on Llandudno seafront after a challenging finale, which includes a SKODA King of the Mountains climb on the Great Orme.

Highlights of Stage One are on ITV4 at 2100 on Sunday 7 September, with live coverage resuming from 1300 on Monday on ITV4, for Stage Two from Knowsley to Llandudno.

on September 07, 2014
Email ThisBlogThis!Share to TwitterShare to FacebookShare to Pinterest