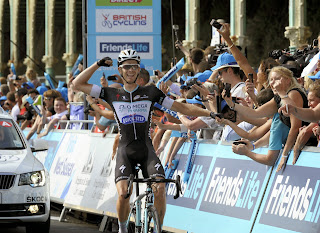 A trio of testing SKODA King of the Mountains climbs in the final 60-kilometres took their toll on the peloton, and Friends Life Yellow Jersey Alex Dowsett in particular, with the Movistar Team rider losing 2 minutes 34 seconds and falling to tenth place overall.

Garmin Sharp's Dylan Van Baarle held on from the break to take third, behind Ignatas Konovalovas, but more importantly to become the sixth Friends Life Yellow Jersey of the week, taking a 19-second lead over Michal Kwiatowski into the final stage. 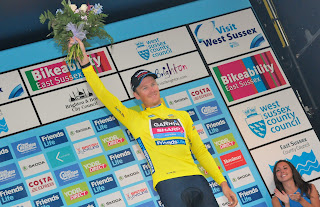 At the head of the stage it was Vermote, with the Omega Pharma Quick-Step rider attacking from the break on Ditchling Beacon and soloing to victory on Brighton's Madeira Drive. 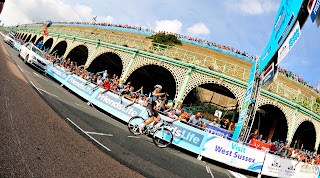 With the race behind splitting to pieces, it was an attack from Vermote's teammate Kwiatkowski, also on Ditchling Beacon, that detached Dowsett and sent a 22-rider group away, including the likes of Bradley Wiggins, Nicolas Roche and Edoardo Zardini.

Dowsett, assisted by Giovanni Visconti, chased, but in vain and with no further help, as the Bear Road climb and fast descent to the finish prevented them from regaining contact.

Vermote was able to win alone, with Konovalovas and Van Baarle following him home, before Kwiatkowski led in the group for fourth, rejigging the Friends Life General Classification dramatically.

Speaking afterwards on his dramatic rise into the Friends Life Yellow Jersey, Van Baarle said, "I possibly went under the radar a bit I was still I think 14th in GC but they don't know my name for now, and hopefully they will remember me.

"I'm really tired. It was a pretty hard day, we went almost from start to finish full gas and when I crossed the line i was completely dead.

"I started to think we might do it when we had ten minutes in the break. Then some DS said there were only two Movistar guys riding and then we held the pace really high. Then Julien [Vermote] said he wasn't going to ride anymore because OPQS are chasing. At that moment me and Konovalovas went full gas to the finish line.

"Before the start of this race I knew that I wanted to show my name a little bit, show myself maybe get a top ten or top fifteen but I didn't expect to be wearing the yellow jersey. Now I'm thinking about the podium or maybe winning.

"I like the short prologue distances for time-trial. I'm not a Wiggins that needs 50km or whatever. I'm more a prologue specialist. I will do my best and we will see what happens tomorrow. I don't know how the legs will feel tomorrow for the other guys and it will be hard tomorrow.”

"As you see, it's hard racing here at Tour of Britain! The peloton couldn't control this breakaway. Luckily we had a strong Julien Vermote there. He really deserves this win. He pulled so much for us, for me every single day and today he took a beautiful victory. Congratulations to him. We're really happy about it.

"Of course, I wanted to also take back the yellow jersey but Van Baarle was still in front. It's hard to control everything in a race. We accelerated on the second-to-last climb and dropped Dowsett, but it was hard to close the gap on the group between Vermote and us. But OK, I'm only 19" down. There is the time trial tomorrow which I said earlier in this race that it would be important, even if it's short. Anything can happen. I have done well on short time trials like the one of tomorrow. So we will see. But today we are going to celebrate the big victory of Julien."

Having received the congratulations of his Omega Pharma Quick-Step teammates, including Mark Cavendish, immediately after the line, 25-year-old Vermote admitted he hadn't been expect the result.

"I'm pretty surprised I had the energy for a breakaway win to be honest. Only one day this week I didn't ride at the front of the peloton because five days out of the six I was pulling for either Kwiatkowski or Cav. I had given my all every time but every day I seem to have recovered well and I have felt very strong.

"Today we didn't mention me getting in the break at the team meeting but at the beginning of the stage Kwia rode up to me and said maybe it would be a good idea for me to get in the break if I was able. He thought that perhaps I would then be in a position to help him in the final stages if the peloton caught the break.

"I got in the break and I immediately felt good and when out lead went to ten minutes I remembered from the previous day how hard it is to chase down a break like that. We rode very well as a group but at 140-kilometres I stopped contributing because still my main thought was Kwia for GC back in the peloton. Anyway when we rode through the second last climb it was clear we would stay away so I started to ride full gas again and then I really wanted to win. I know my place in the team with all the great riders we have, I love to help them, but also I like to ride to get one victory for the team as well

"My teammates were so happy for me after the finish and it shows that the work I do for all of them, and the team, includes big rewards for myself too."

Reacting to losing the Friends Life Yellow Jersey, Dowsett said afterwards; "I was disappointed. I thought I woke up feeling pretty fresh, but as soon as we hit those climbs, I knew I was suffering. I got as much food down my neck as I could, and looked after myself as best as I could. The team were amazing today, it's difficult because we had three guys up there on GC. With the finish being as hard as it was, we knew we needed a back-up plan. We didn't want to be using Giovanni [Visconti] or [Ion] Izaguirre to work. But the gap to the break went out so much, and the other teams said if you don't put one more guy up there, we won't help. Visco had to do a lot of work late on, he tried to help me save it.

"It's been a good week. Hopefully I'll have a good TT tomorrow. One minute is a lot to make up in 8km. I've worn yellow, and when I came into yesterday I didn't expect that. It's been a nice race, Friends Life have put a lot of effort into thiss, and Mick Bennett has produced one of the best Tour of Britain's yet.”

Elsewhere An Post Chain Reaction rider Mark McNally sealed the SKODA King of the Mountains jersey, with a 21-point lead over double stage winner Matthias Brandle. The Liverpudlian, who took the jersey in his home city on Stage One, still has to finish the London stages, but with no categorised SKODA King of the Mountains climbs, McNally is poised to keep the jersey for the entire week.

The destination of the YodelDirect Sprints Jersey, sponsored by parcel delivery company Yodel, will be decided in London, on lap five of the final circuit race, with just current wearer Sebastian Lander of BMC Racing and Dowsett in contention. The Movistar Team rider is two points behind the Dane, with three points for the winner of the final YodelDirect Sprint.

The Friends Life Tour of Britain concludes in central London on Sunday, with a split stage including an 8.8 kilometre individual time trial before the traditional ten lap circuit race.
Great Britain's Chris Lawless will get the time trial underway at 11:01, with riders heading off at one-minute intervals, including Steve Cummings at 11:52 and Mark Cavendish at 12:05, before the top ten riders go at two-minute intervals, led by Alex Dowsett at 12:39, with Friends Life Yellow Jersey Dylan Van Baarle last off at 12:57.

on September 13, 2014
Email ThisBlogThis!Share to TwitterShare to FacebookShare to Pinterest