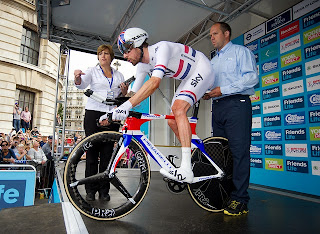 The Giant Shimano rider outsprinted Mark Cavendish on Whitehall in the sprint battle that British spectators had been waiting all week to see, with Kittel just edging Cavendish, ahead of Italian Nicola Ruffoni. Wiggins had taken victory in the time trial ahead of Sylvain Chavanel and Steve Cummings, clocking a 9:50:71 around the London circuit. Meanwhile Van Baarle finished eleventh, 25 seconds back, ceding just nine seconds to sixth placed Kwiatkowski.

With a lead of ten seconds in the Friends Life General Classification, only disaster or a freak result in the sprint finish would prevent the Dutchman keeping hold of the Friends Life Yellow Jersey, and that's how it proved.

"I didn't really win the race today, - won it in Brighton yesterday,” said Dylan Van Baarle afterwards. "It was tough to defend my jersey in a time trial against Kwiatkowski but I did it and I'm very happy, I will remember this day for my whole life.

"I like these kind of stage races very much - not too long - but at the start of the week when I saw the list of riders, guys like Wiggins and Kwiatkowski I knew it was going to be very hard. I was hoping for perhaps top ten. 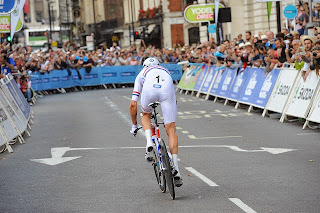 "It's been a very hard race, the roads are heavy, lots of little steep climbs but also the six man teams is a factor. It makes it really exciting as we saw in the stage of Alex Dowsett on Friday when the peloton were pulling and pulling and could not catch the break. That ride inspired me a little bit for our break on Saturday.

"In the future I would like to develop into a Classics rider - Roubaix and Flanders - and also races like this. I am probably too heavy to be a Grand Tour rider!"

Come the final sprint and the Giant Shimano team reeled in the final attempts at another breakaway victory, keeping the pace high along Victoria Embankment and setting things up perfectly for Kittel. With Cavendish's Omega Pharma Quick-Step teammates also at the fore, the Manxman was perfectly positioned on Kittel's wheel, but could only get alongside the German on the dash up Whitehall, as the first three riders crossed the line spread across the full width of the road.

Despite an early attack on lap one, Alex Dowsett couldn't stay away in his bid to take the points at the single YodelDirect Sprint on lap fiveand overall erstwhile leader Sebastian Lander, with the Dane's BMC Racing teammate Steve Cummings taking the YodelDirect Sprint from the break, to prevent him losing the jersey.

An Post Chain Reaction's Mark McNally finished safely in the pack to confirm his hold on the SKODA King of the Mountains jersey.

Two of the week's most prominent riders also made an appearance on the London podium, with double-stage winner Matthias Brandle joining his IAM Cycling team colleagues as winners of the Friends Life Team Classification, and Alex Dowsett taking the overall Rouleur Combativity Award for the 2014 Friends Life Tour of Britain.

Chris Latham was the final daily Rouleur Combativity Award winner, take the cheese for the London stage presented by Transport for London.

on September 14, 2014
Email ThisBlogThis!Share to TwitterShare to FacebookShare to Pinterest