The "Crow Cross" Wessex League event promoted jointly by Bournemouth Arrow, Bournemouth Jubilee Wh, Poole Wheelers & the New Forest CC in January raised over £1200. The funds were donated to Dorset and Somerset Air Ambulance, Hampshire and the Isle of Wright Air Ambulance and 2358 Ferndown SQN ATC ( Ferndown Air Cadets) at a presentation at the Hamworthy club, Bearwood. Joy Wittington attended and accepted the cheque on behalf of Dorset Air Ambulance and Ian Browning did so for Hampshire Air Ambulance, with Paul Brown (BJW) accepting a cheque on behalf of The Air Cadets All four clubs were represented at the presentation, Peter Fairbank from Bournemouth Arrow, Paul Brown from Bournemouth Jubilee, John Burridge, New Forest CC and Graham Hurst from Poole Wheelers. 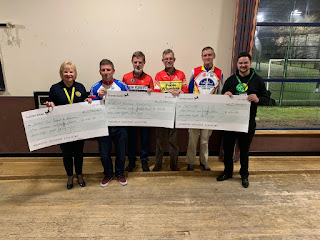 on March 07, 2019
Email ThisBlogThis!Share to TwitterShare to FacebookShare to Pinterest