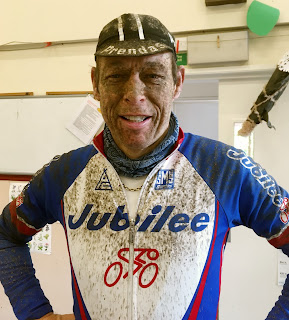 Mudgaurds are essential for winter riding!


In its early days in the 1980's the 75 used to finish at the Little Chef on the A31, an incongruous mix of steamy, muddied cyclists and families out for lunch kept the tills ringing. A destination visit as opposed to a passing one to a "Little Chef" could never be explained? The cafe has gone but the 75 carries on, the start and finish now at Merley near Wimborne. Falling on the second Sunday in January there is no keener examination of winter condition, or indeed, enthusiasm. And enthusiasm there was with 76 signing on, enough to form three groups, on a damp, grey, benign morning. Pedestrian out to Cranborne, a nice pace to get the legs warmed up before the climb across to Damerham sorts things out a little.Was it raining? or was it mist? or were we riding in a cloud? it was certainly moist but never cold and the virtual lack of wind allowed the groups to stay together. Gradually climbing from Coombe Bissett through the Ebble valley to Shaftesbury, the road was filthy, even with mudgaurds it was impossible to stay clean and hold the wheel.The drop down from the hilltop town is fast Stour Row, Todber & Marnhull are quickly behind us. Left at Sturminster Newton to Manston and Hamoon and across the main road, the little dig up softens the legs ever so slightly, the starter before the main course that is Okeford Hill.Out of Fitzpaine the road is already rising up, the poor surface disrupting rhythm and gear selection before the left turn really spoils the day. Steep at the bottom, the view opens out as the incline eases but no one is looking except only at the wheel in front. Fast down to Turnworth & Winterborne Stickland, the drag up to Bryanstone is hard only because someone on the front is making it so. Blandford St Mary, Langton Long, Shapwick, White Mill, the Cowgrove and Wimborne Minster, could do it blindfold. Tea and cake back at Merley, the conversation full of optimism, the kind only the bike can provide. The weather has been worse for the 75, all who finish deserve a medal but only those who complete all 4 reliabilty trials will get one.

*The final trial in the series, the "100 in 8" is on February 5th, on a course that goes east to Burley,north to Shillingstone, west to Piddletrenthide and south to Wareham. 35 riders have ridden all 3 reliability trials so far.

on January 08, 2017
Email ThisBlogThis!Share to TwitterShare to FacebookShare to Pinterest