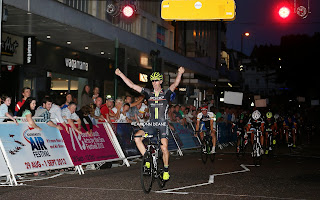 After just two years the Bournemouth Town Centre Criterium has been axed. Budgetary constraints is the reason given for axing the Criterium from the Wheels festival, monster trucks, supercars, motocross, F1 Cars and a classic vehicle pageant are all unaffected by the lack of funds. The festival though, will feature a nightglow cycle ride and BMX stunts. The 2013 race was run as a stand-alone event in July and included a corporate challenge, a supporting race and an elite race. In 2014 the Criterium featured as part of the towns Wheels festival in May, however the supporting race was dropped leaving just the corporate relay and elite race. “Local Riders, Local Races” understands that Bournemouth Council had held preliminary talks with organisers, Sweetspot with a view to bringing a round of the prestigious Tour Series to the seaside town but was unable to agree on a date. Ryde, on the Isle of Wight, announced two weeks ago that the town will host the televised Tour series on May 14th. While Bournemouth turns its back on bike racing other towns in the south are keen to be involved, Winchester will hold a day of Town Centre racing in June and Wilton will once again host the British Cycling, Cycle Wiltshire GP Elite road race. 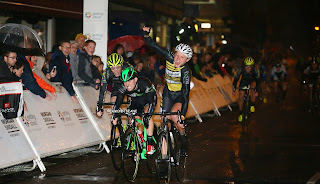 Al Murison wins in Bournemouth 2014
on February 16, 2015
Email ThisBlogThis!Share to TwitterShare to FacebookShare to Pinterest