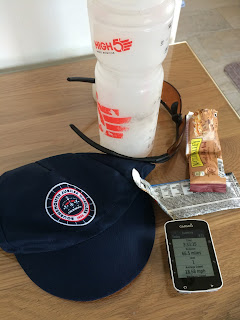 .....50 or so riders for the second of the Bournemouth Jubilee Wheelers reliability rides. This time over an advertised 100km, though the route is 66 miles: which means you get 5 miles on the Cowgrove free, Greg Eastham. Whereas on the '50' plenty of riders were in shorts or knee warmers, this time full winter kit was the order with a low, single digit temperature and a stiff north-easterly, as I left the house in semi darkness for the ride over to Merley. £5 paid - with one notable exception - we depart.

Out along Ashington Lane to Lytchett along lanes ridden so many times, before turning south towards Wareham and across the Arne to Corfe Castle. The first climb of the day past the castle, through Church Knowle for the Cocknowle climb; the first 'test' of the day. Then dropping fast to East Creech and left onto the old road race circuit, along Holme Lane then towards East Lulworth, the road along the ranges our last chance to enjoy a tail wind. A left took us up onto the Lulworth road race circuit behind the castle, today the slowest some had ever ridden up that lane, before racing down into Wool. The road up through Bovington Camp never seems that bad 'on paper' but its ridden on poor road surface and drags unpleasantly on and on. The roads through Affpuddle to Milborne St Andrew were empty and by now the sun was out, turning into as good a morning for riding as you could expect in December. The only issue was whether to follow the Garmin route or the road signs at the entry to the village. Neither of the two groups gained an advantage.

Through Milton Abbas we paid little attention to the picturesque village, the talk dropping, as the incline rose to double digits. Worse is the left turn onto Dunbury Lane, where the road drags remorselessly upwards for another half mile. Whereas Cocknowle was a chance to 'cock measure', here ride at your own pace, ignore those in front, forget those behind. The reward is the descent into Winterborne Stickland, the dry roads allowed a group to reform before the drag up towards Bryanston. But horror! Despite the shouts of the Chairman sat at the back (too far back!), the group sail past the turn and take the long way round by the Fairmile. The previous Chairman would not be impressed. Through Blandford and onto the Cowgrove. With the end in sight the pace invariably quickened, fatigue meant the front group broke up, as those in front pushed on. No prizes in December but we do it anyway. First riders back in three and a half hours. Coffee, cola, cake, chat and another 10 miles back home. In the sun, even the traffic along Castle lane didn't seem that bad. With the Chain Gang on Saturday and nearly 90 on the clock for this morning, its the first good training block of the Winter.Thanks to Kevin Ridge, Martyn Reeder and Lindsay Sims for organising and Tom Clements for acting as roving Marshall (we'll call it quits for the fiver!).......

Thanks to Jubilee Chairman Bob Richardson

on December 01, 2019
Email ThisBlogThis!Share to TwitterShare to FacebookShare to Pinterest