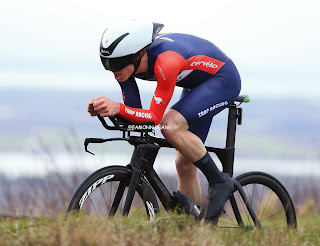 South region champion Matt Downie (TAAP Cervelo) continues his solid start to the season, taking second place at the Severn Bridge Road Race on Sunday (4th) behind Rupert Graham (Spirit Tifosi). Downie, who won the king of the mountains classification, finished second behind Marcin Bialoblocki at the Devon Primavera race the previous weekend and surely a win cannot be too far away! Next up for Downie is the Jock Wadley Memorial in Essex next weekend

" nothing was going for the first half of the race everyone was chasing everything. Then it was hacking it down and everyone started sitting up so I put in an attack and quickly got a decent gap. I bridged over to Andy Turner (great tester) and we worked well together. I could see they were chasing behind but we kept pressing on. Rupert from Spirit Tifosi bridged across by himself and we were all working well together on the last lap we had well over 2 mins 30 seconds on the main bunch and about 50 seconds on some chasers. On the last climb Rupert went hard I followed, Andy got dropped then my legs just gave up and Rupert went on to win it and I crossed for second"

on March 04, 2018
Email ThisBlogThis!Share to TwitterShare to FacebookShare to Pinterest