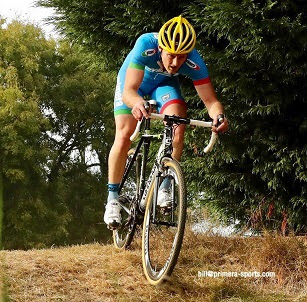 I'm still buzzing after this afternoon's cross racing. An old venue, but for reasons beyond those of a simple cross rider, an all new course on the opposite side of the drive. Why, I don't know, but from first views a very welcome addition to the Wessex calendar and in complete contrast to the muddy races we've all been subjected to over the past 3 years. For today we were presented with dry weather. A little cold, but dry! And boy was it dry, causing the course to resemble more of a mid-summer MTB venue with dust being thrown up through most of the corners, light brown grass torn by tires and ruts appearing in places you didn't need them. With the kids at a party I was a free agent for the day and made the most of it arriving early to get a few extra practice laps in chatting to other riders as we bounced round, some looking smoother than others.

So lets describe a little more of the new course at Fairthorne. Dry, tick. Flatt-ish, tick - no real hills to mention. Yeah there were some lovely little rises that made for a perfect 'interval' effort, but nothing that went for more than about 10 seconds with any ferocity. Twisty, oh yes, but again nothing with any nasty off-cambers. And bumpy...did anyone mention bumpy. Bumpy up, bumpy down, every corner, every switchback. Today's entrants will leave Fairthorne with one over-riding memory, it was fast and bumpy. But fear not though, this is not a criticism - cross racers take what's thrown at them, all courses are different, and all present their own challenges. The order of the day was therefore getting the tyre pressures right. Too hard and you'll bounce even more. Too soft on the dry grass and the tubular feels like it's scrubbing below you. Just right and you're offered a decent degree of cushioning AND the ability to corner. Five practice laps later we were dialled...

Now without wanting to name drop, but I will anyway, stand out performances from the practice laps alone go to Adrian Lansley. I'm sure where he rode had it's own little private strip of tarmac lightly covered by grass. Smooth, powerful and precise. It would come as no surprise to learn later that Adrian had put in another masterful performance to claim the top spot. Top ride dude!

You may also recall my 'moans' over the previous weeks about dreadful grid slots. Well, I spoke with the organisers and they agreed the 3rd row was as good as it would come until we reach the 10th round where and riders start dropping their worst results. For me I need to wait until round 11th though as I missed the first two races before the natural levelling will occur. Don't worry if you don't keep up, the league works in a clever way but can penalise you if you miss or don't finish a race until round ten. So anyway, a grateful row three it would be.

The start was on a slight incline. Nothing heavy and just my thing, hopeful that something may open up in front of me after the start whistle and I'd find myself somewhere inside the top ten. Well obviously my left foot hadn't read the script because four attempts later he was clipped in and we were away So bad was the start I went backwards at an alarming rate of knots. Even after the race I had people saying "wow, great start mate"....and I knew what they meant. Schoolboy Cotty was in the house and I knew it. I blame my left foot, we were all on a different page at that moment and it won't happen again - he's been warned!

So now we're left with a problem. The top boys, Adrian Lansley, Mike Cotty, Sam Allen etc were gone, a good thirty yards up the course and the first section of bends left very little room to pass. However I made some surprisingly good progress in place. The legs felt fine and the frustration of the start enough to have me looking for anything to make progress. This worked well until I found my natural position, for catching those now in front became more difficult, and very little behind was causing me concern.

We circulated like this for 3 laps trading places up and down with a couple of riders. Ryan Smith was another who looked on good form as we tussled through some uphill bends before he got the better of me (next week Ryan, next week buddy...). And, just as things started to settle, the ever formidable Oscar Hutchins made an appearance. For those that don't know, Oscar's had a great road season on his way to collecting his elite road licence. Oscar is also my team mate - no further explanation required. That's right....team mate! To say Oscar made things hard is an understatement. However, racers are racers and every time he looked over his shoulder I knew what was coming - another huge effort to try and drop me. Fair play, he got twenty or so yards a couple of times, but I dug deep. There was no way I was writing tonight's report knowing I'd not tried everything possible to catch and pass my team mate, and so it paid off with a lap to go. I saw my chance, pounced and broke the elastic knowing a couple of yards can quickly grow to thirty or more, and so it was to be. Legs working well, but lungs ready to explode, I crossed the line a short way ahead of one team mate and a couple of hundred yards behind the other. Again, plaudits to Joe Andrews riding with the boys he was :-)

Another good day out with thanks to the Wessex League and Fareham Wheelers for a great event. Next up is the country ground at Sparsholt, Winchester for round 7 of the Wessex League. Again, muddy in previous years, so let's see what next Sunday has in store.

James Cotty
on October 24, 2016
Email ThisBlogThis!Share to TwitterShare to FacebookShare to Pinterest