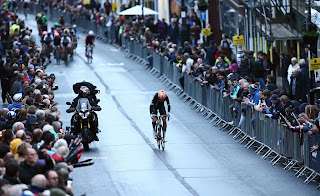 The Pearl Izumi Tour Series will return to the South coast in 2016 with a Round in Portsmouth reports the "Portsmouth News". Last year’s series opened with a Team Time Trial and Criterium around the town of Ryde on the Isle of Wight, “LR,LR” understands the Portsmouth Round may also feature a round of the Matrix Fitness Womens Grand Prix. The televised team series brought big crowds to the streets of Ryde and Portsmouth can expect the same, the city last hosted the series in 2010.
More to Come.....

on January 27, 2016
Email ThisBlogThis!Share to TwitterShare to FacebookShare to Pinterest