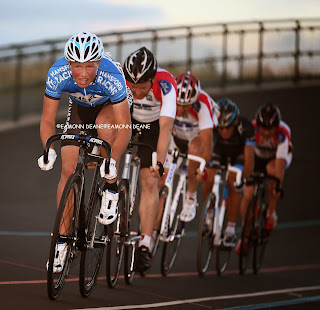 Fielding in Hansford Colors.
Alistair Fielding (Poole Wheelers) was the best of the local riders in the first round of the Ice breaker series at Newport. Fielding won his scratch heat & final, point’s heat & final and placed second in the elimination race, good enough to win the Youth B Omnium. Having ridden for Peter Hansford racing last season Fielding has moved back to the Poole club and enjoyed the meeting at the Wales National Velodrome. “It was really good fun, I can’t wait for round 2” said the thirteen year old. Charley Calvert (Bournemouth Arrow) was the best of the rest finishing 6th. Rebecca Raybould (Poole Wh) was best placed of the girls coming 9th in the Youth A female event. Also in the A event were Bournemouth Arrow pair, Molly Haycocks, 32nd & Lucy Edmunds, 33rd and Poole Wheeler Rebecca Hurst 41st. Alex Jolliffe (Team Terminator) finished 14th in the Youth A Omnium. Rounds 2 & 3, of the 3-event Omnium series, also in Newport, will follow in February and March.
on January 28, 2014
Email ThisBlogThis!Share to TwitterShare to FacebookShare to Pinterest