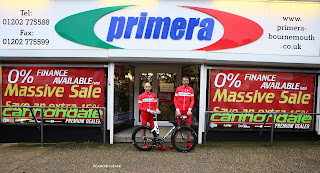 Gary Dighton & Paul Jones will ride for Primera-sports. Com in 2014. The ex-Poole Wheelers pair will head up a small time trial- dedicated squad targeting local and national events. Ex-BBAR and former Olympian Dighton, has enjoyed something of a renaissance in the last few seasons and if Jones can recapture the form of a few years back, they will be a force to be reckoned with on the local time trial scene. Both Jones & Dighton will remain as second claim members of the Poole club but hope the shop support they will get from Primera will give them an edge in the coming season. Both looking lean and fit, it is obvious their winter training is going well and the recent bad weather is seen as an inconvenience rather than an excuse to stop riding. Dighton came down on some ice during an early morning session recently, apart from that it is business as usual with both doing a mixture of road and turbo work. They are looking to recruit at least one more rider ahead of the new season, with an eye on the National 3-up team time trial championships in Wales in June. Racing at all distances up to 100 miles, other targets include the National 50 mile championships and both riders are looking for “sub 50” 25 mile times. Alongside the Primera-sports.com TT squad is the Primera-UK Biking race team, for further details contact Alex at info@primera-sports.com 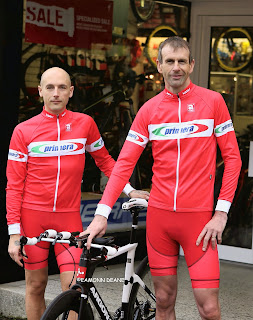