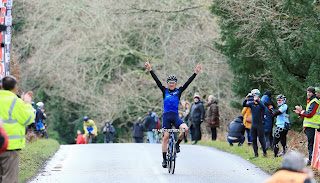 Jacob Vaughan (Canyon DHB P/B Bloor Homes) won the 54th Perfs Pedal in Hampshire to give his new team a winning start to the season. Pre race favourites Marcin Bialoblocki (Nopinz Latchem RT) & Alex Richardson (Canyon DHB P/B BLoor Homes) withdrew due to illness but the day was no less exciting for the loss of these two. It was teammate and 2018 winner, Alex Paton who did the early damage, riding hard the first time up Portsdown Hill, Paton pulled a small group of riders clear on a damp, blustery typical Perfs day. The lead was slender, only a few seconds but Paton, Vaughan, Damien Clayton (PM), Jordan Peacock (Spirit Tifosi RT), Lee Frost (Nopinz Latchem RT), Jack Rootkin-Gray (Solihull CC) & Jack Freeman (Meudon Pedal Heaven Le Col RT) pushed on across the exposed Portsdown Hill road, above Portsmouth harbour. The advantage was never more than 22 secs but the bunch would never quite close it. 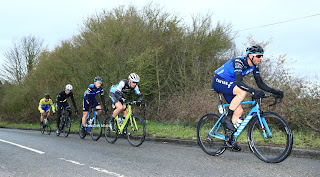 Rootkin-Gray & Frost lost contact the fourth time up the climb, the relentless pressure of Paton too hard to live with. Indeed, it looked like Paton was working for Vaughan, the 19 year old sitting in 3rd or 4th wheel forcing the impressive looking Clayton, Peacock and Freeman to respond to the watts on the front. The 5th and final time up the gap was over 1 minute and it was Paton who pulled away, holding a 20 second lead as he flew down the descent to Southwick but the move would not stick. Peacock led the pursuit and reeled Paton in as they the turned onto the finishing loop, Paton tried again, leading onto the climb up to the line with Clayton & Vaughan not far behind. 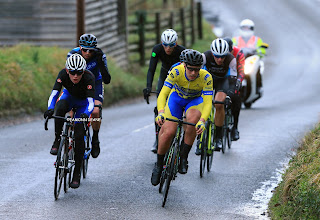 Vaughan made his move at the flamme rouge, as Paton finally paid the price for all his hard work, Clayton, who regularly trains with the Canyon boys, followed but could not close the gap as Vaughan's fresher legs made the difference.Behind Sam Culverwell & Jack English (Guernsey VC), Louis Rose-Davies (Canyon DHB P/B Bloor Homes), Rupert Graham (Spirit Tifosi RT) & Sebastian Garry (High Wycombe CC) pulled away from the bunch on Portsdown Hill, staying away to contest the minor placings 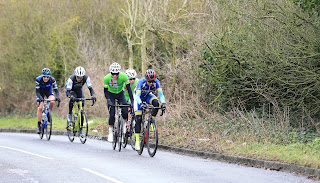 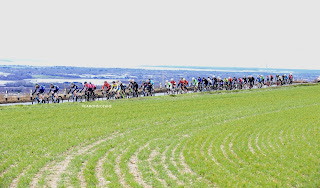 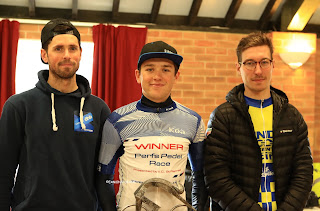 Jacob Vaughan
" Tim (Elverson) has been having a go at me all the time in Calpe, he loves this race, say i have to win it, i did not sleep that well last night because i was so worried about this race, there is so much pressure coming into it. If we come second here its looked upon as a terrible result. I really enjoy the atmosphere of this race, great organisers a great course, i love coming out for it. Alex did the majority of the work in the final, he really put the hurt on, i thought i might pop. Damien was really strong, i hit it with a Kilometre to go but started to park up at 500 " 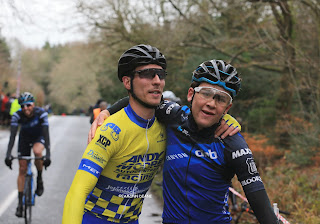 Damien Clayton
"Yes pretty happy, its always an unknown coming into this race, dont know where you are going to be so early on in the season and the conditions, having not raced since October i am pretty happy how things panned out, the climb is hard but its what comes after, if you are in the top ten wheels, well positioned its ok. Alex really put the hurt on and the crosswinds at the top made it hard. It was good to get into the break and when it was just three of us at the end i was just getting double-teamed by the Canyon lads. It looked they were working for Jacob, Alex attacked a lot and obviously it was down to us to chase, allowing Jacob to just sit on. I got across to Alex at the end, i thought we could work together but before i knew it Jacob got on, i knew then second was the best i was going to get. Jacob just rode off, he was really strong"

Alex Paton
"Yes it was a good race to be honest, the main thing was to come away with the win and its nice to get on the podium as well. In a loose sense it was a plan, the main focus was to make sure we won the bike race and if we had the option of trying to help a certain guy win it would have been nice to have Jacob, that was our thought. Its a difficult thing to control, ultimately we had it down to three guys, myself, Jacob and Damien and you can make quite a lot of decisions from a group of three. I committed early on the climb, we knew we would hard on the climb, make use of the terrain really, its a short race, 46 miles, there is a lot of bike riders who are strong for forty six miles you know! You cant come to a bike race like this and underestimate guys, you have to show everyone here a good level of respect. We come here with a bit of a target on our backs but that's bike racing. We have to take the race on, if we get it wrong we are going to get shown up, there is a bit of pressure, we have a bit of responsibility. Most of the guys racing here today have spent the week working in the office, we have spent the week riding training and preparing for bike races, you do have to give credit for how hard everyone else works. Jacob really did race perfectly to be honest, used his energy where he needed to and put himself in the right places. Fair play to Damien, he rode well responding to all the attack"

Chris McNamara (Nuun Sigma Sport London RT) Perfs Regular
"Yes it was super fast, Canyon smashed it, we knew they would, it was just one lap over the top where it was just attack, attack, they were obviously trying to get a man up the road and once they had that break, it was not going to come back and the headwind down the descent nullified any chase. It was great fun though, i always enjoy it" 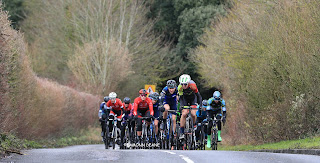 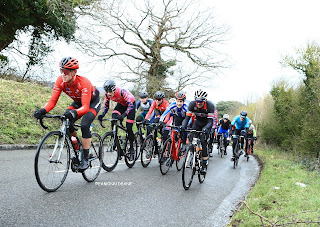 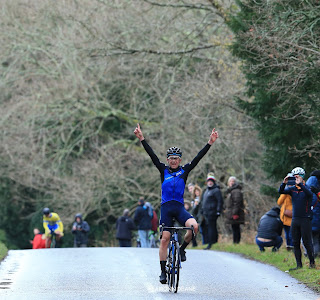 on February 10, 2019
Email ThisBlogThis!Share to TwitterShare to FacebookShare to Pinterest