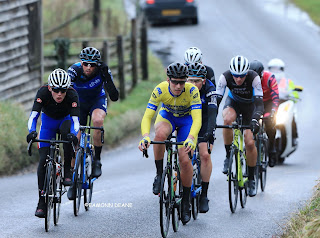 Damien Clayton (PM) looked strong and impressive as he rode to second place behind Jacon Vaughan at the Perfs Pedal on Sunday. The 26 year old from Barnsley has only been racing three years but already holds an Elite licence and read the race perfectly. Clayton picked up £140 for his efforts and we spoke to him at the race HQ in Southwick......"Last year was the first time i rode Perfs, i was not really in shape for it had done no intensity over the winter so i was pretty happy. It Is always an unknown coming into this race, dont know where you are going to be so early on in the season and the conditions, having not raced since October i am pretty happy how things panned out. The climb is hard but its what comes after, if you are in the top ten wheels, well positioned its ok because it just strings out like an elastic band.. Alex really put the hurt on and the crosswinds at the top made it hard, he was absolutely flying, he was on a really good day. It was good to get into the break and when it was just three of us at the end i was just getting double-teamed by the Canyon lads. It looked they were working for Jacob, Alex attacked a lot and obviously it was down to us to chase, allowing Jacob to just sit on. I got across to Alex at the end, i thought we could work together but before i knew it Jacob got on, i knew then second was the best i was going to get. I could not really attack them, if i attacked they would bridge to me and do me over again. I had to reserve all i could for that final climb.When i saw Alex pop i tried my best to chase down Jacob and get up to his wheel, i was doing well for ten seconds or so but he just rode off, he was really strong. I knew it was going to come down to myself and the Canyon guys I train with these guys quite a lot. ("No, No No", he laughs when we suggest Tim Elverson might make him an offer) It's only my third season racing, so it is all pretty new, i was going to do it as a Private member like last year but just got on a new team in January (PM). I live in London but i am moving back up North, my team is based up there. I will be back down for the Jock Wadley and Wally Gimber after we ride a few Crits around Wakefield" 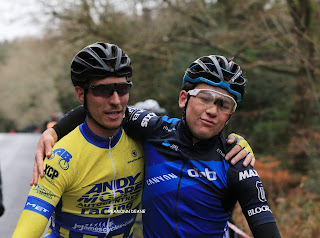 Clayton & Vaughan
on February 11, 2019
Email ThisBlogThis!Share to TwitterShare to FacebookShare to Pinterest