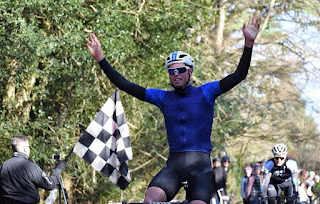 Photos by kind permission of Hugh McManus
Canyon Eisberg breathed a sigh of relief after Alex Paton defied the odds to win the Perfs Pedal in Portsmouth.
The former Madison Genesis rider clinched glory despite being being outnumbered by Spirit Tifosi riders Rupert Graham and Jordan Peacock in a three-man breakaway.
Graham held on for second before Ben Marks, of Morvelo Basso, won the bunch sprint as the main group finished 34 seconds adrift.
Paton, however, had proved himself the strongest on the day, briefly gapping his two rivals on the final climb before edging clear again at the finish on Hundred Acres Road, near Wickham.
And for UCI Continental outfit Canyon Eisberg, who naturally began the National B race as hot favourites, is was a case of job done. Just.
Paton said: “I’m really pleased. We would have liked to have a few more people higher up but the main thing was to come away with the win.
“We knew we couldn’t take anything for granted. The two lads with me were very strong and I had to play it quite smart in the end.
“Jack (Pullar) had the hammer down on lap two and I came over the top. The Spirit Tifosi lads came with me and we got away.
“Over the top in the crosswind the last time I attacked the pair of them and for the rest of that circuit we rode pretty much as three individuals.
“I couldn’t ride away from them, so it came back together. In the end, two of us came to the line.
“I was quite confident going into the finish that I could take the win and luckily it turned out right in the end.”
Graham, meanwhile, admitted there was a tinge of disappointment at not landing a shock victory on his Spirit Tifosi debut.
However, the Cornishman, 24, who caught the eye of Spirit Tifosi after impressing with victory in their autumn road race in October, was chuffed to be able to compete at the sharp end with the likes of Paton. 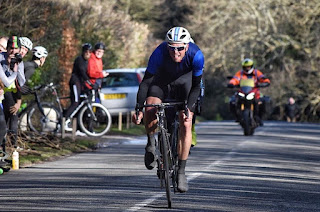 Graham, racing only his third National B event, said: “Overall I am pretty happy.
“It is definitely a step up in racing for me and to hang in the front group is always a good sign at this time of year.
“I definitely had no kick at all, though. Hopefully that will come.
“We had a good chance but we were under no illusions of how good Alex was. And the kind of pedigree of rider he is.
“It is always going to be tough to overturn someone like him and that is how it proved in the end.
“Maybe we could have done things differently. I’d have liked to have been in a proper gear, earlier.
“I definitely missed one or two at the end there I could have done with. It might have been a little closer but it probably wouldn’t have been enough.”
With the British road racing season now officially under way, Mick Waite, who organises the Perfs Pedal on behalf of VC St Raphael, saluted another successful event in February sunshine.
Waite said: “I thought it went very well. A few might have been under a false illusion with the weather, where it was so sunny.
“I’m not saying it was one of the most difficult Perfs but it was tougher than it looked. I certainly wouldn’t take anything away from the riders who were there at the end.
“There are expectations on Canyon Eisberg. But Tim (Elverson) always supports the race, which is great for us.
“And it wasn’t like they filled the first five or six places. A lot of people came into it determined to take the race to them and those who had the legs did.
“Hopefully that shows it is worth coming to races like this and taking them on.”
James Roe, of Team Guernsey,is the winner of the James Atherton & Richard Phillips-Schofield Award for the highest-placed category two rider from the British Cycling south region. 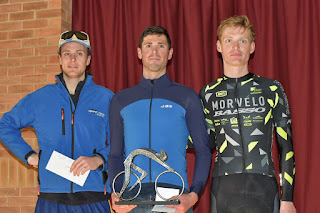 on February 11, 2018
Email ThisBlogThis!Share to TwitterShare to FacebookShare to Pinterest