Dorset Miles: BJW 100, "Come and have a go if you think your'e Hard Enough! 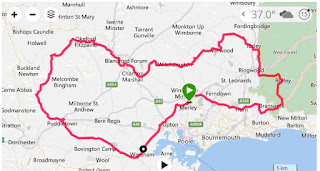 One hundred miles on the first Sunday in February, the Jubilee are taunting us, aren't they? "Come and have a go if you think you are hard enough". Never mind "Ride (insert expensive city of your choice)" come and ride Dorset, you already own the roads so why pay more than a couple of quid for a test that is far more examining than any soft, summer, armchair ride. From the quiet, muddy, living in the past lanes of north Dorset to the horn blowing, spitting & snarling of the national park, that is the New Forest experience, the Bournemouth Jubilee Wheelers 100 mile reliability trial has it all. No big climbs but the rolling, grippy roads take their toll and the cold north easterly wind make the 2018 edition a bit of a monument. 65 sign on for the fourth trial in the well established series, some choose the 100 km option but the 38 that ride the main event qualify for a medal. Such is the attraction of this bit of plastic that riders have asked to submit strava records of similar distance efforts to get their hands on one, quite rightly the club are having none of it. Bournemouth Arrow CC, the New Forest CC, UK Biking, Purbeck peloton, all are represented and all are welcome. Its always nice to see three figures on the Garmin, the only total you ride around the block for , when marooned half a mile short. Back at Merley, the smiling, mucky, tired faces are timeless, that perspective-giving smug feeling is priceless, the training effect questionable, the effect on morale beyond question and, after all, the reason we do it!
120 miles 6hrs 48 mins