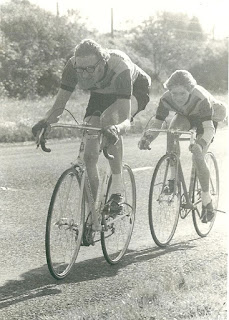 ............I consider it an honour to be asked to describe, on behalf of the Club, the contribution Dave has made to the Bournemouth Arrow.

I first met Dave when I was only 5 years old, staring straight ahead at Dave’s knee caps at the Club Room, with the rest of him stretching up to the sky, little did I know I would spend the rest of my life to this day looking up to Dave.

Dave had started cycling in 1948 and almost immediately threw himself into racing. Looking at the Open Time Trials results that first year, you can see the immediate impact Dave made, coming 20th out of 90 riders in the Jubilee 25 with a 1hour 6mins, just 4 minutes off the winner. By 1949 Dave was down a1- 4 in the same event, in 1950 he came 4th in the Poole Wheelers event in 1-3 and in 1951 Dave got to the top spot in the Jubilee 25, the most prestigious local 25 of the whole season, 1st out of 110 riders, in a stonking 59-38. From that period in Dave’s racing career, I know he was very proud of his1953 season with 2nd in the Salisbury 25 and wins in both the Poole Wheelers 25 and the Wessex 50. Dave backed this up with a 2nd in the Jubilee 100 in a stunning 4hours – 17 mins, followed by really solid 245 miles in the Poole Wheelers 12 hour. These terrific performances, all on local roads, meant Dave achieved an incredible 10th place in the National Best All-rounder Competition with his reputation as a top rider firmly cemented.

With the arrival of Jeane, Dave’s family life started to take precedent and active cycling took a back seat for a few years.

You can’t keep a good man down though and sometime late in 1968 we saw the return. I say we because I remember this most vividly. Riding on Club runs with Dave that summer I knew he was very unsure whether he still had what it took, particularly having been so good first time round. With encouragement, Dave tentatively entered the late season Salisbury 25 and sure enough tucked away in 44th place came Dave Moss in 1-7. This was a significant event for both of us, it showed Dave there were signs of hope, and for me it remains the one and only occasion that I actually beat him. On the back of that ride we thought we would have a crack at a Team Time Trial in 2 weeks for a bit of fun! It was over 42 miles though, I felt I’d be OK, I’d just beaten Dave and had ridden a lot of road races that year but Dave was genuinely concerned about his stamina. Sitting behind Dave in that event was a revelation to me, how can anyone ride so smoothly and not seem to be trying, how can he crouch so low when riding behind I can see over the top of him at the road ahead, and later in the race why does the speed start creeping up when Dave is on the front, and finally why can’t I keep it going when it’s my turn? If he didn’t know it – I certainly did – Dave was back.

The next few seasons saw Dave put in some really great rides, impressing everyone with 3rd in the Wessex 100 and 4 placing’s in the top 6 in the Poole Wheelers 12. I was relegated to be bucket and sponge support to Dave during those events. You get to know what people are made of in a 12, riding on one occasion in awful conditions, I saw first hand just how determined Dave was.

During this second period with the Club, Dave also became more involved in the organisation of club activities, first on the Committee then very soon after as our Club President. Dave proved to be an absolute natural in this role. His calm and assured manner underpinned everything he did. Add to that his fierce competitive drive and you could sense an evolution was about to take place in the Club.

Under Dave’s leadership Coaching and training activities began to appear, weight training at the Club Room, circuit training at Winton School, road sessions on the Queens Park Circuit, Winton Rec and, of course, the dreaded Cliff Top! Speak to any rider who took part in those and they will smile, simply because those sessions were absolutely great and everyone loved them. Dave’s organisation of those, at the expense of his own participation, was fundamental to their success. I’ve no idea how he did it, with Dave there no shouting and balling at people, he just seemed so calm! These Cliff Top sessions were monumental, first a warm up, then a 1 lap TT with riders going off at 30 sec intervals, then the dreaded hill repeats in Durley Chine Car Park, and finally the famous 10 lap handicap, all run by Dave! So do we remember them as Dave’s sessions? Well not really, because that was not Dave’s style, that was not important to Dave, he knew what was needed, created just the right environment in his calm assured manner, and it really worked. Among the Facebook tributes, Phil Stone was spot on when he described Dave as the “King of Keeping his Cool”.

Under Dave’s guidance, Arrow riders George Dixon, Lynda Allen, Ian Hastings, son Steve, and later Paul Whitfield all won medals at National Championships, this is just too many successes to be a coincidence and they stand as a tribute to Dave’s coaching at that time.

Whatever the Arrow has done in respect of coaching and rider development since that time can be tracked back to Dave, he was and will forever remain the Founding Father of who we are as a Club and what we do.

Dave did not limit his involvement to just supporting the Arrow, his commentating at Poole Track remains unsurpassed in its balance of an objective description of the racing, underpinned with warm and encouraging words of support for the newcomer. A complete professional, Dave was keen to show no favouritism to Steve and would only refer to him in commentary as “Moss”!!

In later years Dave’s health problems give him and his family a difficult hand to play, but play them he did with the same approach he had all his life, calmly making the most of each developing situation. I’m so pleased that Dave saw Bournemouth Track completed, safe in the knowledge we now had a dedicated cycling facility as a successor to the Queens Park Circuit and the Cliff Top he used.

I’ve missed seeing Dave in these past few years but I know he is in a good place now, where there is a warm gentle tail wind, the tarmac is smooth, the tyres are pumped hard and zinging. I can see Dave crouched super low with those long legs spinning away, making it all look so easy to the poor guy hanging on to his back wheel!

In time Dave we all hope be seeing you again, but please next time, no Durley Chine Car Park!

on September 16, 2015
Email ThisBlogThis!Share to TwitterShare to FacebookShare to Pinterest