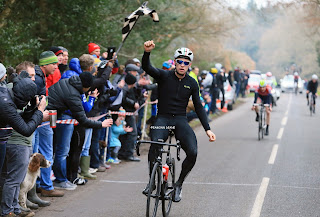 Chris Opie will return to defend his Perfs Pedal race title on Sunday February 11th. Riding for the newly named Canon Eisberg team, Opie will be looking to make it a hatrick of wins, having won the South Season opener back in 2012 before his victory last term. Other notable entries include
Opie's young team mate, Louis Rose-Davis, 8th in 2017, Rose-Davis went on to win the National Junior title after impressing last Spring and Jesse Yates (Team Wiggins). Yates claimed 13th place last year in a race that saw 4 juniors finish in the top 14, VC Londres pair,Jacob Vaughan,2nd, and Fred Wright 14th the other two in the quartet. Entries for Perfs will close the Sunday (21st) with the final start list finalised after that.
Enter Online HERE


on January 19, 2018
Email ThisBlogThis!Share to TwitterShare to FacebookShare to Pinterest