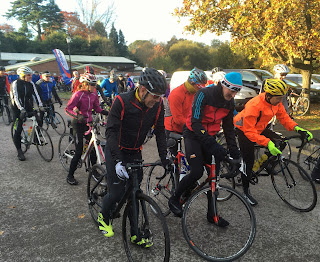 117 signed on for the 30th ish Bournemouth Jubilee Wheelers 50 mile reliability trial, with all but a few signing back in, inside the 4 hour time limit. At just £1 a ride all got good value for money on a sharp, bright November morning, the temperature rising in tandem with the north westerly wind. To ease the passage through Wimborne riders were set off in groups of 30 a few minutes apart, the climb of Rowlands hill forcing selections early doors. Anti clockwise this year, its harder against the clock, the route has changed little over the years, heading out to Deansgrove, Furzehill, Gaunts Common and down to Horton. The rise up from Woodlands thins the group, most rejoining on the descent, then on to Knowlton and the ruined, haunted church. This time last year the Drovers Arms at Gussage All Saints was boarded up, it was warming to see the spruced up community pub awaiting the first customers of the day. The climb up from Gussage St Michael is steep but short and we are quickly down the other side at Long Crichel and the A354, left at Tarrant Hinton, Tarrant Launceston, Tarrant Monkton & Tarrant Rawston, thankfully the climb up to the golf course puts the Tarrants behind us and the scream down to Blandford Forum is only spoilt if you have to stop at the roundabout at the bottom, we had to stop. Through the town and then the long drag up and over to Winterborne Stickland, steeper at the bottom, the climb levels off but the height gained puts us into the wind for the first time. The fresh air slows us but not for long, we are heading east and lined out through Winterborne Whitechurch as pressure is applied on the front. Across the A31 at Red Post and the twisty, gravel strewn lanes around Morden, the tough approach to Lytchett Matravers softens the legs before the final climb up to the village. Pardys Hill is short but steep, crest that and all that remains is the dash along Merley lane, tea & cake and the chance to talk through the whole ride again! "We could call this a sportif and charge £20" says one green, keen Jubilee member. "Not on my watch" growls the "stuck in the past" chairman! 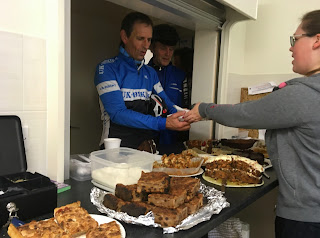 
on November 06, 2016
Email ThisBlogThis!Share to TwitterShare to FacebookShare to Pinterest