The Essex Tandem Weekend: Mucking about on Bikes! 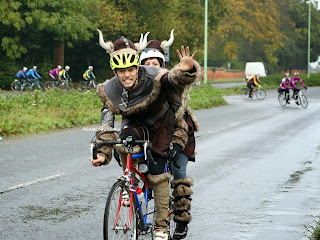 “Local Riders, Local Races” is about racing, it is why we are here. That romance of suffering on a bike has always appealed, proper training, not “steady rides”, the taste of blood at the back of the mouth, far more preferable to coffee and chocolate cake (well nearly). However even “LR,LR” must kick back and relax sometimes and with the social season in full swing there is no better time to ride just for the fun of it and the Essex Tandem weekend provides that fun. First run in 1964 the tandem weekend is now in its 50th year and seems as popular as ever, with 37 pairings, 5 solos & a tandem trike riding the 2014 edition to Copdock near Ipswich. 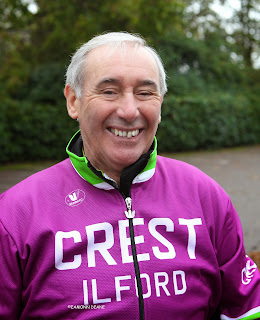 Organiser Graham “Spyder” Adams (Crest CC) was sixteen when he rode that first event and has only missed one since, a particularly steamy weekend with a young lady proving a more attractive option back in the sixties. Traditionally held on Remembrance weekend, the format has changed little over the years, a Friday night burn-up to pub and youth hostel, with a nice comfortable hotel on the Saturday night. A following van carrying luggage made its debut in the early 70’s. 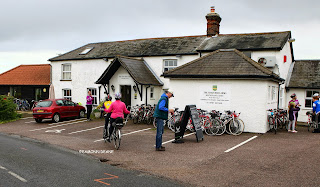 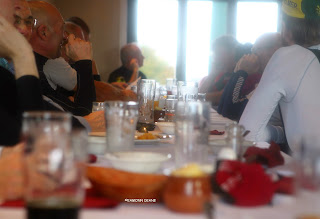 Lengthy pub lunches fuel the legs and Paul O’Kelly (Redbridge CC) leads the singing, often accompanied by John "Twiggy" Browning (Crest C C) on Spoons! Of course competition is never far away, sprints to pub signs are fiercely contested, even tactical! But the winners are forgotten before the first pint is dispatched.Landlords and Landladies love the late season business, the straining lycra,the smiling faces, the folk songs and of course the generous "whip round". The characters come and go, "Weapon", "Gadaffi", "S","Savage Mick" "Hippo" the tandem weekend has seen them all and survived. A tea stop in the failing light on Sunday afternoon brings the fun to an end. 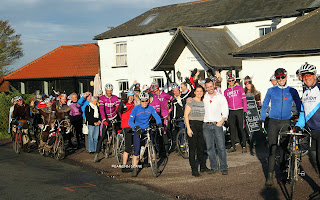 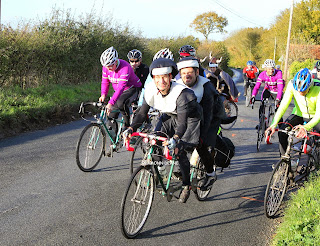 Adams is a track fan but loves the road also and is no stranger to distance. In 1985, along with Phil Dade (Bournemouth Jubilee Wheelers), they mounted an assault on the Tandem 24hr record. At 438 miles the target was achievable but three punctures and heavy overnight rain left them disappointed on 416 miles. Dade moved onto triathlon but Adams returned the following year and stoked by Mike Smith (Maldon & Dist CC), they set a new mark of 466.57 miles at the Mersey Roads event. Adams also captained Smith to the 12hr record in 1985. 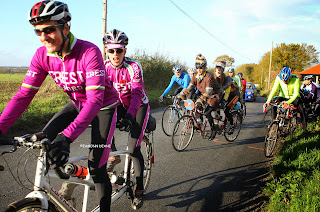 Over the years the Tandem weekend has roamed far & wide, Brighton, Stratford, Northampton, Buckingham, Felixstowe, even France. Wherever the destination, there is always time to remember, the "Last Post" is played (on a trumpet this year) and two minutes silence is impeccably observed. A finger-post sign on a triangle of green in Suffolk, a fitting location for reflection. 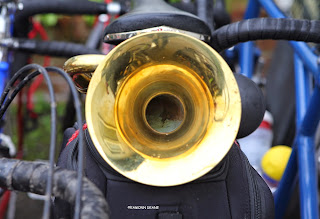 The years may not have condemned yet but they have certainly wearied, the Friday night thrash has gone, a leisurely rendezvous at an Essex hostelry is now the preferred option. London clubs are well represented, Crest CC, Maldon & Dist, Chelmer RC, Redbridge CC, Glade CC are to the fore but word has spread, with Chippenham & Dist Wheelers, Southampton Uni CC & Bournemouth Jubilee colours standing out. It is not about clubs though,it is about riding bikes, it is about taking the micky, mucking about with your mates, it is about comradeship. The 2015 Tandem weekend is on the 7th/8th November and is heading to Cambridge all the regulars will be there, the yard of ale contest, the fancy dress and of course Graham “Spyder” Adams! 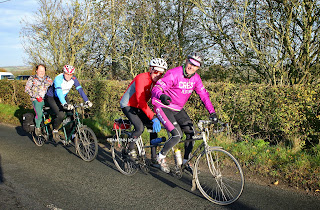 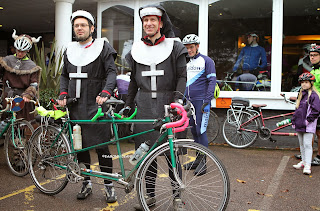 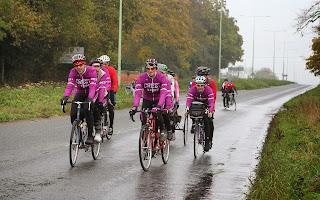 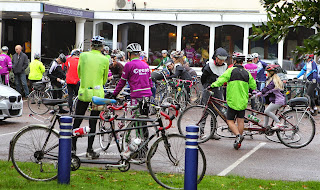 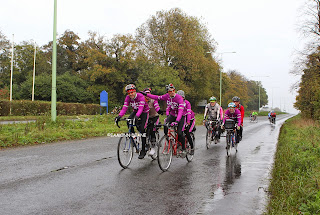 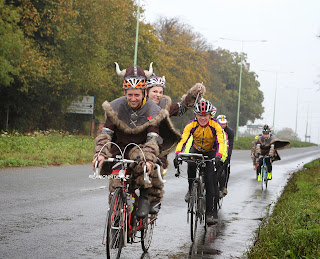 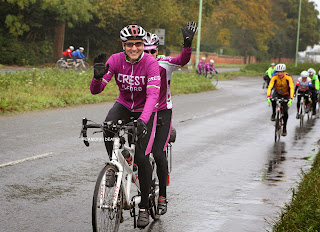 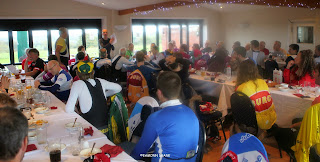 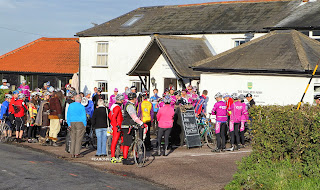 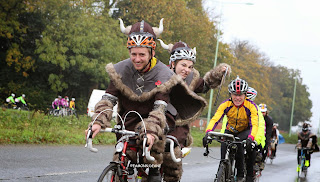 on November 12, 2014
Email ThisBlogThis!Share to TwitterShare to FacebookShare to Pinterest