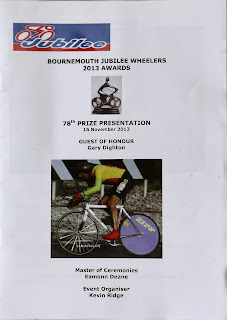 Bournemouth Jubilee Wheelers celebrated the year with their annual awards dinner at Colehill Cricket club near Wimborne. Guest of honour, Gary Dighton(Poole Wheelers) spoke light heartedly about the rivalry between the two clubs and accepted a few boo’s with good grace, all tongue in cheek, of course. In a straw poll of miles ridden during the week, the former Olympian came out on top with 335. Dighton praised the club for their open time trial promotions and is looking forward to next year’s National 50, promoted by the Jubilee. Zena Dighton provided the glamour and accepted a boquet of flowers, Zena was part of the Oundle Velo team that set comp record at 15 miles in 1996, a record that still stands today. Forty Eight members and guests attended the dinner, a far cry from the one hundred & fifty plus “bun fights” of the past. However social secretary, Kevin Ridge, with the blessing of the committee, provided free wine with the meal and a good time was had by all. 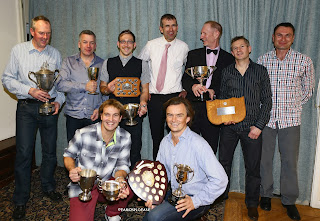 
on November 17, 2013
Email ThisBlogThis!Share to TwitterShare to FacebookShare to Pinterest