Winchester Criterium, A Soundtrack for Racing! 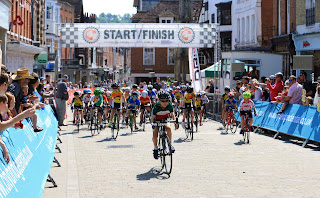 When Alfred the Great laid down the Winchester street plan in the late 9th century it was to better defend the city from the marauding Vikings. Little did he know he also created the perfect Criterium course? Four regional titles up for grabs, the always-entertaining Marty McCrossan calling the action over the PA, exciting support races, throw in some glorious weather, sounds like a winner! The tight, technical, 1 km track starting on the smooth cobbled high street provides all the thrills and spills of classic Criterium racing. The specialists love it, the pure road men, not so much! The crowds were out in force, the knowledgeable and the curious, ringing the free cowbells given away by Hargroves Cycles and creating a wonderful, adrenalin filled atmosphere. The perfect backdrop, a soundtrack to race to! 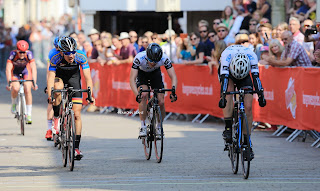 Charlie Kelly (Bristol Cycling Development Squad) took the U16 Boys title after Pfeiffer Georgi had won the first leg of her golden double. Kelly won a tight bunch sprint ahead of Nathan Huynh (Cotswold Veldrijen) after Huynh had done much of the work. Kelly was happy to let Huynh drive the race always fancying his chances in the sprint. Charley Calvert (Bournemouth Arrow), second in the recent Lancashire youth Tour had been expected to challenge but a crash left him nursing a shoulder injury. Calvert took a spare wheel and continued, the tyre was soft and he limped over the line disappointed.
“Lost lots of skin down my left hand side, badly bruised shoulder and nose and my bike is in bits” Just about summed up his race. 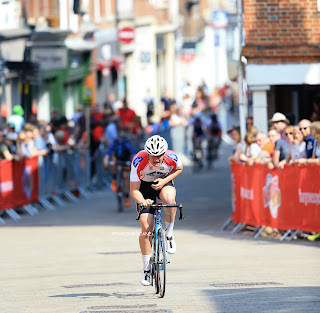 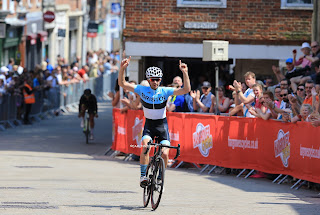 The gap was always small but Phelps had the legs to hold on, the fight for second place was tighter, Thomas Treagus (Hargroves Cycles-Ridley RT) edging out Rhys Thomas (Southampton Uni cc). 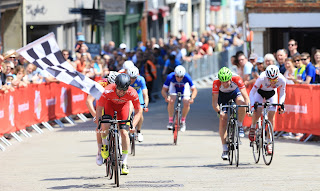 Other winners on a great day of racing included Oliver Graham (Tyneside Vagabonds) U8, Edward Charles (Charlotteville CC), U10 AND Sami Vaudrey (Zappi’s Racing Team), U14. 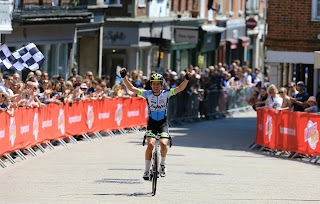