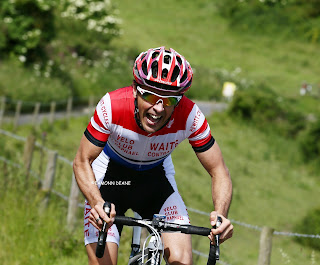 Riding for Vc St Raphael/Hewitt Cycles Portsmouth-based, Simon Brooks won the National Veterans Road Racing Championships at Wing near Leighton Buzzard, Herts. Forty Five year old Brooks was part of a 4 man break that went clear after just 26 miles of the 67 mile race. Temperatures of 86 Fahrenheit began to take their toll but the break, now down to 3 hung on at 20 secs. A local resident, unhappy with the event, decided to block the race with his car. Trying to get past, Brooks collided with the wing mirror of one of the cars caught up in the chaos. After a 1 mile chase he was back up to the 2 leaders and the race came down to a 3 man sprint finish. Sprinting has never been among Brooks' strengths but after a tough race his rivals were tired and he was the clear winner. 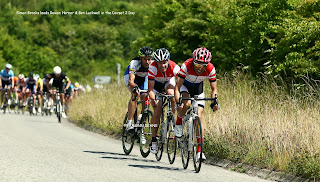 The new 45-49 yrs champion was quick to thank sponsors Mick Waite, Paul Hewitt Cycles and his coach Chester Hill. Brooks has been racing since he was fifteen, when he started training with former national time trial champion John Pritchard. “I have no natural talent other than persistence and willingness to work hard.” He says
What does he remember about his first race? “My first race was a undulating 5 mile time trial which I did when I was 15 years old. It took me over 18 minutes! I remember that some of the other riders had the most fabulous bikes compared with mine. The first pack race was a handicap near High Wycombe, I set of in the first group and kept dropping my companion but slowed knowing that being in a group was important. I won the prime on the 1st lap then on the 2nd lap I punctured!”
The national Veterans Championship is up there with Brooks’s best results, some 25 victories on the road include beating Professional riders “Which is always nice”
What about training ?
“It’s Very much more scientific. It used to be based on time on the bike, then heart rate monitors came in and now power monitors. I work in IT and love technology so tend to adopt technology that can help me earlier than most.”
And what next ?
“The vets championship was my big target - I can be very single minded. I plan to race through to October, but no single objective.”

on July 10, 2013
Email ThisBlogThis!Share to TwitterShare to FacebookShare to Pinterest