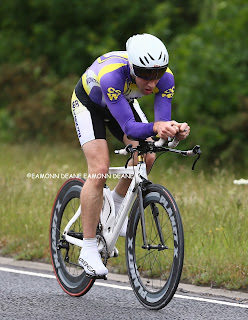 After a brief run of good weather during recent club events we were due a bad one, and it happened tonight! Fairly heavy rain and a strong/gusty southerly wind offered little assistance anywhere on the course but plenty of hindrance. One rider even abandoned before the start line and left the nine others to seek shelter under the trees whilst shivering in wait for the timekeepers call.

Once up and running the body soon warmed up but weighted by the rain the wind seemed to have extra power to push those with deep section wheels around from side to side and with greasy roads any cornering had to be taken with care.

Steve Pink extended his lead in the points table by taking the win despite posting his slowest time of the year in 24:14. Young Stuart McPhail produced a great ride for second, his time of 25:15 hides the fact he took a wrong turn without which he would have been close to challenging for the win. A Cambridge rower Stuart clearly has the engine and, with some further development of his cycling legs, could become a future contender. Fairly new club member Oliver Clark proved he's not afraid of the conditions and grabbed his first podium in only his second CC Weymouth TT.

It's been said before but a big thanks again for resident timekeeper Justin Oakley for standing around in the rain all evening allowing us to race.

Thanks to Steve Pink

on July 03, 2013
Email ThisBlogThis!Share to TwitterShare to FacebookShare to Pinterest