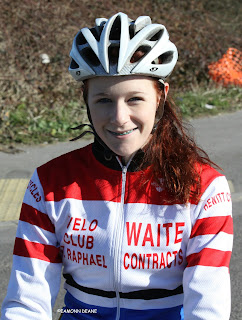 The Oakley road race near Oxford had a full field of 80 riders and a temperature of 25deg C in stark contrast to last year when there was a field of about 40 riders and pouring rain.
The course was based on a 8.5 mile circuit, covered 6 times, around the single track lanes near Oakley Village.
There were big teams from some of the top UK teams including MG-Maxifuel, Matrix Fitness and Scott Contessa. Local rider Ellie Gilham found herself riding as the sole entrant from VC St Raphael.
There was an early solo break from Les Filles Racing that got no more than 200m but stayed out in front nearly 2 laps and was finally reeled back in during lap 3. The bunch stayed together until lap 4 when there was a huge crash very near the front of the bunch that brought down or impeded half the riders.
Ellie rode intelligently throughout, staying close to the front but still had to perform an emergency stop with the bike up on the front wheel to avoid hitting the fallen riders. She then had to chase hard to regain the bunch that was now down to about half strength. After a short pause and assessment of who was left Ellie attacked with just over 1 lap remaining. She quickly got a 300m lead but couldn’t stretch it any further. There was a counter attack by 2 riders but they only got half way across the gap and stalled. With half a lap remaining the bunch put the hammer down for their sprinters and pulled everybody back.
The final sprint was won by Hannah Barnes with Ellie finishing in the bunch. 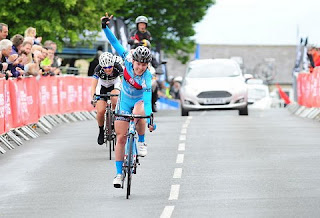 Hannah Barnes Winning the Curlew Cup. Photo courtesy of VELOUK
When interviewed afterwards Ellie said she saw Hannah in the bunch and knew she couldn’t beat her in a sprint so decided to try and get away and hope somebody would go with her, unfortunately nobody did and the chasing riders couldn’t bridge the gap.
However Ellie was pleased with her performance especially as she had toned down her training and racing over the last 8 weeks due to A level revision and exams.
Ellie is now training hard and looking forward to the Junior National Road Race Championship in Yorkshire at the end of the month.RESULT

Thanks to Dave Gilham